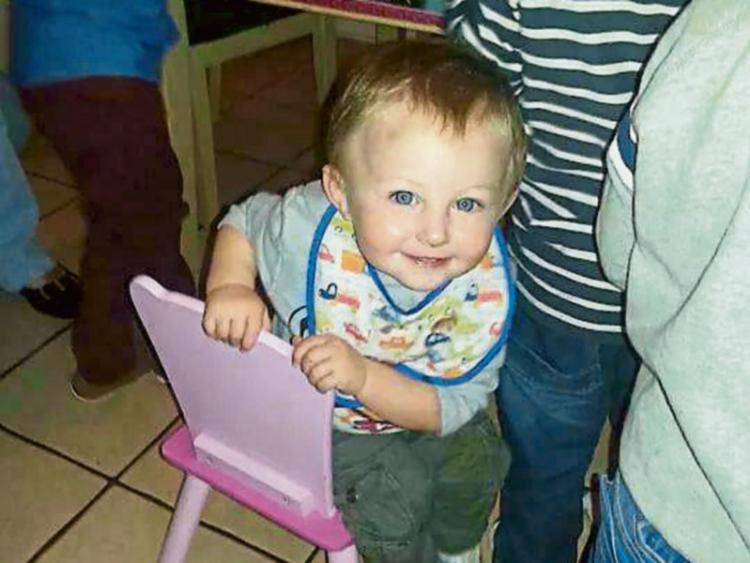 LAST Monday evening as families in Oola made plans for what weather forecasters predicted would be the hottest day of the year, Marco Velocci was back on the narrow road where he grew up. His son Alex, 3, was with him. According to a neighbour, “the girl was there too”.

“He looked great to me anyway. He was down there with his son, the young fella and the girl. They were just down the road there. They seemed fine to me, talking away. But, as they say, you never know what happens behind closed doors.”

Just two houses stand between the homes where Mr Velocci and Jodie Power - Alex’s mother – grew up. Both homes are adorned with potted plants and climbing ivy.

Sweet scented flowers are clustered in boxes, tubs and an array of hanging baskets. Young love blossomed on Oola’s Old Road and, in 2013, Marco and Jodie welcomed baby Alex into the world.

The relationship wasn’t to last and the couple went their separate ways. Jodie moved into a bungalow with young Alex beside Oola Community Centre, at The Glebe while Marco moved to the village of Lattin in County Tipperary.

At breakfast time on Tuesday morning, at approximately 8.35am, gardaí received a report of an incident at the bungalow at The Glebe. A female, now known to be Jodie, received a number of injuries and was taken by ambulance to Limerick University Hospital.

A broken arm and a number of cuts had been inflicted at the hands of her childhood sweetheart.

Marco and young Alex left the house and travelled in a black Audi out the Pallasgreen Road.

Approximately one mile from Brooks Bridge the car ploughed into a truck sending the truck into a field towards the barrel-shaped bales of hay. Father and son died instantly. They didn’t stand a chance.

Little Alex’s body lay on the roadside. Gardai carefully placed a green blanket over the small boy. Nearby, his dad was at the wheel of his ‘05 black A4 Audi estate.

“It’s wicked. I just can’t believe it, can’t believe it. It is very, very hard to grasp. I’m just after coming from town,” says a woman in her 40s as she stops to talk on the quiet road where Jodie and Alex were living.

It’s just over four hours since darkness visited The Glebe. A light veil of perspiration forms on the woman’s forehead as she speaks.

Across the road, a garda patrol car parked outside the front wall is the only clue to the unrest which has visited Jodie and Alex’s home – a modest, yellow coloured bungalow with two chimneys, three small front windows and a white weatherglaze front door. The air is quiet. Eerily quiet. Chirping birds can't shatter the silence nor the delicate footsteps of a next door neighbour as he paces up and down the gable end of his home.

A green and white chequered Limerick flag, hangs limp on the peer between Jodie’s house and his. There isn’t a breath of a breeze.

On main street in the village Tom O’Halloran emerges from his Post Office, his shoulders slightly hunched. Jodie and Alex had only been in there the evening before, he’s been told.

“They are well-known in the area - it is major, major devastation,” he says.

His heart goes out to the families. He’s a father himself.

Marco, he says, was an “outgoing, hard-working” individual.

“It’s unreal - something that you read about that happens some place else but you don’t ever realise it will happen at home.  Tragedy knows no bounds,” he adds.

Next door, in Oola Pharmacy, pharmacist Anne-Marie O’Halloran stands behind the counter. When words of the tragedy are mentioned her eyes well up. Teardrops threaten to drop onto her buttercup-coloured top.

“It just comes as a shock to everyone and I suppose it makes us all realise that life is short and we have to make the most of it - none of us knows what’s around the corner. No-one deserves anything like that - you think of everyone left behind who has to deal with it,” she says.

“I’m only here now about six months but when you see people coming in and out and going up and down the street you get to know them. When somebody is around the same age as you, it does impact.”

And the little boy?

“Alex,” she says, softly, after a long, delicate pause, “was such a cutie pie”.

Outside Neily’s bar on the main street under the hanging flower baskets, a young man in his 20s drags every last puff from a cigarette.

“I was at work when she rang me,” he says, turning to his young female companion.

“It was a while since we were good friends but we were best friends growing up. We did everything together.”

Jonathan last spoke to Marco around a week ago and found him to be “in good form”.

“He was a brilliant worker,” he says, pulling from the cigarette again, “loved his son, did everything for his child - everything he possibly could.”

Jonathan also knows Jodie. They all grew up together.

“She only lived three doors from where Marco lived. She was renting a house down here but the two of them grew up, up the back road, three doors apart. The three of us all grew up together and the two of them started going out together years ago. Alex was a lovely little boy.”

Marco, he recalls, was quiet in school, very quiet, “but none of us liked school.”

“I can’t believe it,” he mumbles, his gaze lowering down.

“Me and Marco, we used to go fishing, shooting, hunting and take the dogs out - they were our sports. He was a very nice fella - always friendly, would do anything he could to help you.”

Marco’s father Onorio is Italian. He is well-known in Limerick city having worked all his life in local chip shops.  Marco’s mother is Irish and her son was as Irish as can be.

Do many of his friends know of the tragedy?

“There’s one of my friends now,” says Jonathan, “he’s after coming out of work now as well I’d say,” he says, as a car pulls up across the road.

The strong young man with tattoo sleeves walks quietly over.

“You heard obviously, did you?” says one friend to another.

Around the corner, up the hill, the flowers are in full bloom on the Old Road.

A girl is her 20s is crouched down on her honkers, sobbing  into her  mobile phone.

A local resident stands at his front door, watching the world go by.

A car pulls up outside the home, and a man salutes a neighbour before sitting into the passenger seat.

“ They’re grand a lovely family. That’s the father there now now, Mr Velocci,” adds the resident. And with that the car carrying the grief of a small rural community, drives slowly away.