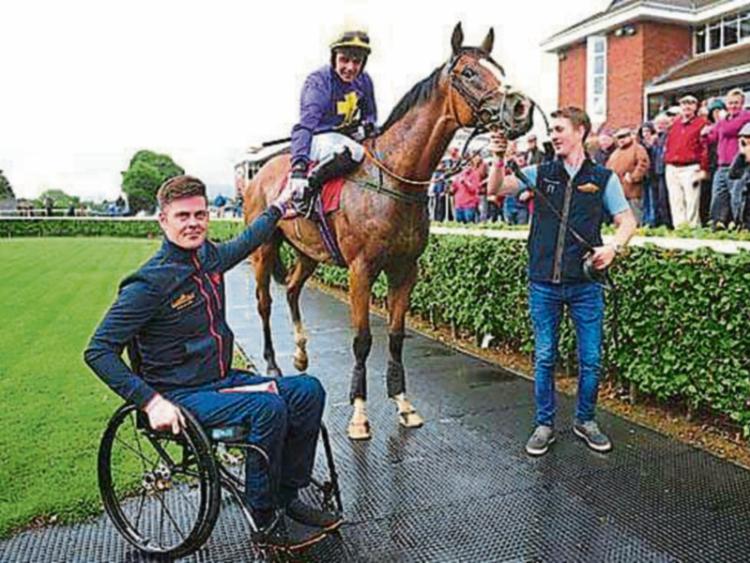 LESS than two months after securing his training licence, Limerick’s Robbie McNamara has commenced his new career with a flourish, enjoying a spectacular double at Cork Racecourse.

The Croom native, who is based in the Curragh, gained a win with his first runner before going on to finish the card with a second winner in Mallow on Friday night.

The success comes little more than a year after a fall in Wexford left the hugely talented former amateur rider in a wheelchair.

Chadic was a first runner for the 27-year-old and the 12/1 shot won the 2m maiden hurdle by two lengths under conditional jockey Conor Brassil.

The landmark winner is owned by Dr Ronan Lambe, for whom Robbie rode many winners, including two notable successes at the 2014 Cheltenham Festival.

“I have been good friends with him over the last few years. He supported me. He has six horses there in the yard - a lovely bunch of horses,” Robbie told the Leader this week.

The rookie handler, who was out of luck with two other runners on the card, book-ended the meeting by saddling Rathcannon (11-4 joint-favourite) to victory in the concluding bumper.

“Call Vinnie ran a cracker, he was second and the other fella, I thought he would nearly win - Flush Or Bust, he disappointed. I would have been disappointed if I had anything less than two winners,” said the handler who had identified the Cork fixture as a suitable platform to launch his new career.

Next stop is the Galway Races where he has five runners.

Having obtained his training licence in May, Robbie intends to saddle Flat and National Hunt horses from his County Kildare base.

“I have a few lovely two-year-olds there and younger horses, so I will try to do both. There are 19 horses there altogether.”

When asked how his training career compares to his days in the saddle, Robbie responded: “I love it!

“It’s more hands on. With the racing you might be doing it three days a week whereas with this you are tuned in the whole time.”

Business begins at his stables on the Rathbride Road on the Curragh at 7.30am when the horses are fed.

“The first lot then pull out at 8.15 and ride out then until just before lunchtime. The horses go out on the paddock then for about an hour each and they get their lunch then at 1pm. They are left alone then for a few hours to relax.”

Robbie heads out to grab some lunch before returning at about 3pm when the horses either go for a swim, a stroll on the walker or for “a pick of grass”.

“They are fed at 5pm, the doors are shut and they are left alone to sleep for the evening,” said Robbie who is looking forward to future wins.

“There are some very good owners here, great staff and lovely horses so I couldn’t be much happier.”