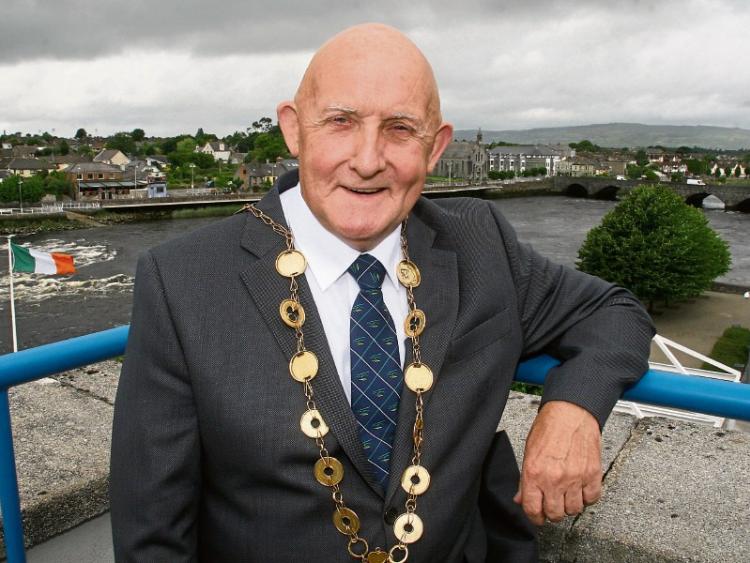 A LITTLE bit of local history was made last week when Mayor Kieran O’Hanlon became the first local politicians to hold the mayoralty of two different local authorities.

It was back in 1996 when he was elected the 800th mayor of the old Limerick City Council in a very close 9-8 vote.

And while the Garryowen man’'s margin of victory 20 years on was far more comfortable, the Fianna Fail councillor admits he had doubts he was going to be elected the third Mayor of Limerick City and County.

“There always is a doubt: having been through as a city councillor some very exciting mayoral elections, it was with a sense of relief and happiness I got 29 votes,” he says.

Twenty years ago, Cllr O’Hanlon’s then party, the Progressive Democrats  (PDs) were in a pact with Labour which saw him over the line.

“It was nine-eight, and as you have seen at mayoral elections, it only takes one member to change sides, and you’d be out of office,” he said.

Relaxing in his mayoral suite overlooking the majestic river Shannon, with the three bridges and the Curragower Falls in view, Mayor O’Hanlon is enjoying the experience of being Limerick’s first citizen more this time around.

He says: “Back then, I was trying to hold down a full time job [at Wyeth in Askeaton]. But trying to get in and out from Askeaton and run the office was difficult. I was new and inexperienced.

“But now I feel I have the experience, I have grandchildren, and my own children are old enough to enjoy what it means to be mayor of Limerick.”

At his mayoral election in County Hall, Cllr O’Hanlon’s family travelled from Britain and America to witness the moment.

In his victory speech, the mayor said, despite some of the lofty ambitions he set, he made sure he didn’t make promises he couldn’t keep.

“I’ve seen people making mayoral speeches before promising thousands of jobs for Limerick, and I'm still waiting to see where they are,” he laughed.

But one thing key to his year in office, Cllr O’Hanlon says, is the promotion of city and county, with Limerick set to discover this month if it has been named Capital of Culture.

To this end, he says: “I make no absolutely no apology for travelling. People can call them junkets if they like, but I think it is important we sell ourselves abroad.”

One of these trips will be a visit to Boston to formalise a sister city relationship. He hopes to lead a delegation of businesses, educational professionals and other stakeholders at the end of his mayoralty.

The mayor raised eyebrows in his victory speech when he said the merger of the two local authorities had been an “unqualified” success.

In the past, Cllr O’Hanlon – one of the last remaining members of the class of 1991 – has been hugely critical of the amalgamation.

He defended his comments in the pre-written speech, saying: “I was not in favour of the amalgamation, and I make no bones about it. The City Council were not happy with it, but we were not given any say, or consultation. Be that as it may, the amalgamation took place. So I feel my duty as mayor is to make it work – and that’s what I’ll do.”

However, he rather ruefully notes that a plan to merge Cork’s two local authorities appears to be off the table for now, pointing out the minister responsible for this, Simon Coveney, hails from the Rebel County.

While he is the mayor of Limerick City and County, Cllr O’Hanlon will continue to give a close nod to the city’s storied history.

This was in evidence from the get-go, when he donned the robes of the old Limerick City Council, which had been consigned to the City Museum.

“I think some of the county people were a bit confused – I’d say they thought I was getting ready for bed,” he laughs, “Despite the wishes of some councillors, they are not going back into the museum while I am here.”

As previously mentioned, Cllr O’Hanlon has spent over 25 years in local politics, and was a community activist prior to this.

Elected in ward two of the old Limerick City Council in 1991, has been returned at four elections since.

Initially elected as a Progressive Democrat, he switched allegiance to Fianna Fail in 1998.

Recalling why he did this, he said: “I became a bit disillusioned. The PDs were in government, and I felt I could deliver a lot more for the people in my area. I was not getting the response I wanted.”

Mayor O’Hanlon outlined a number of projects he was seeking support for, including the then derelict St Patrick’s cemetery.

It was left to the civic trust to step in and restore it.

“I asked for help from Mary Harney and got no response. Maybe I was naive as a councillor to expect ministers to do something for you,” he added.

He left the now-defunct party – founded in the city – because his home place in Limerick was “solidly Fianna Fail”.

“I met Willie O’Dea, and he was anxious I would join. I’m glad he has stood by me 100%, and has remained helpful in all my elections,” the mayor said.

For the third year in a row, Limerick has two mayors, with Fine Gael’s Michael Hourigan holding the lesser office of metropolitan district mayor.

While Mayor O’Hanlon says the two get on, he added: “I think the current set up is ridiculous, I really do.”

The new senior mayor is looking forward to discovering rural Co Limerick during his year in office.

Indeed, he has asked his secretary Marianne O’Reilly to provide him with a list of national schools in Limerick that he can visit, and talk to children about civic pride.

“When they see me coming in the robe, they might think Santa Claus is coming through the door,” he laughed.

As for the legacy he hopes to leave, he concluded: “I hope people will see I will be a hard worker for the city and county, and Limerick will be better placed when I am finished.”