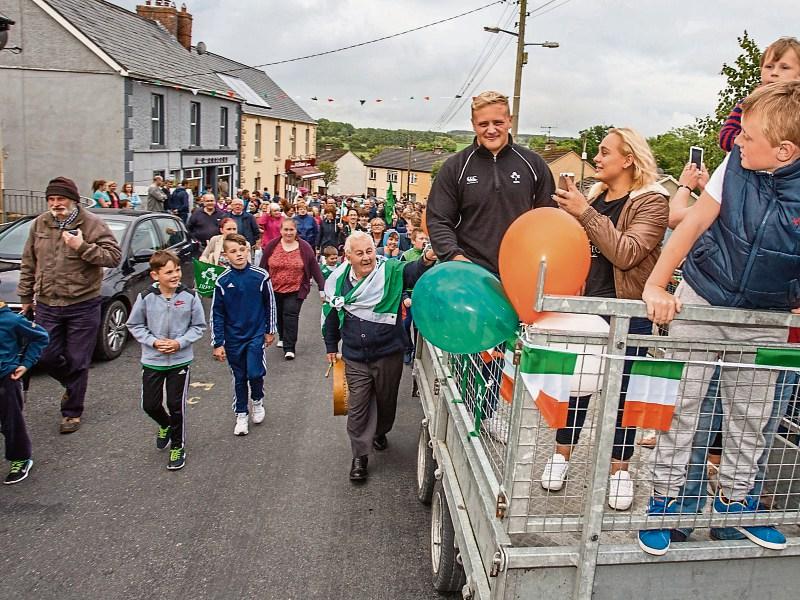 THE inscription on the watch said it all. Ben, the Pride of Ballyhahill.

And in Ballyhahill  itself last Thursday night, they backed it up their gift of a watch with bonfires and a civic reception that saw Ben Betts, Junior Rugby World Cup (Under 20) finalist, feted as a sporting hero.

A garda escort brought Ben and his family from their home through the village to where hundreds of people cheered the achievement of this young sportsman who had brought honour and a dash of World Cup glamour to Ballyhahill.

But the young man himself, who played tighthead prop on the Irish junior rugby team that won its way to the World Cup, was more than a little surprised at such a powerful reception. And true to form, the lad who has been described by all those who know him well as unassuming, Ben  was “a small bit embarrassed” at being singled out for such attention.

But, he told the Limerick Leader: “It is great altogether to be home.”

And of his World Cup journey, he declared: “It was great to be part of a team that made a bit of history.”

That “bit of history” involved seeing off winning all three pool games, against Georgia, Six National Grand Slam winners Wales and the mighty All Blacks from New Zealand, becoming the first Ireland male side to do so. Then came an amazingly emotional semi-final against Argentina before meeting England in the World Cup final.

Unfortunately, their winning streak came to an end in the game against England which they lost.

But for Ben, and his team-mates, it was a hell of a journey and one which they won’t forget. Nor will the people of Ballyhahill, those who travelled to the matches and those who cheered from home.

Now, Ben is looking once more to the future, a future which he hopes will include professional rugby and a lot more chances to don the Irish jersey.

Ben is currently a student of English and History at UL but says his dream was always to be a professional rugby player. “I will hold to that until I succeed,” he said simply. This weekend, his mother Yvonne, a Yorkshire woman, his step-dad Noel Conway and all the family will travel to see him play.

Ben’s success has been a source of great joy and pride to the Estuary Rugby Club which began in 2009.

“The whole thing was to give young lads the opportunity to play the game. And to find a diamond like Ben early on is great,” said Joe Hoyne, the club secretary, who along with other club members travelled to Monday’s semi-final.

“He has put his name up there now as one of top upcoming tighthead props. And they don’t grow on trees. They are very rare.”