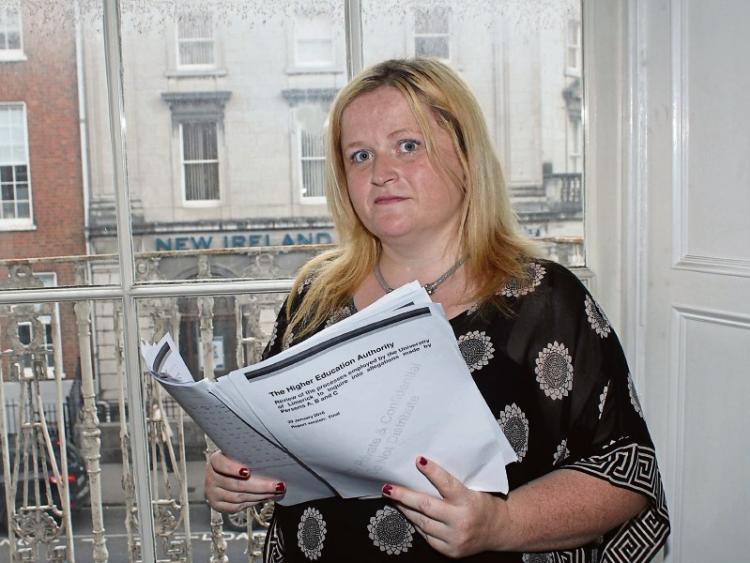 Leona O’Callaghan, who brought her concerns to the PAC, has said she doesn’t wish to engage with another facilitator to repeatedly explain her case

ONE of the key whistleblowers in the finance department at the University of Limerick has said she cannot allow matters at UL to consume any more of her life, and is walking away from the process following the latest move by the Higher Education Authority.

After commissioning an independent review into policies and procedures at UL through Mazars – published in February - it is understood that the HEA is now examining the possibility of appointing a ‘facilitator’ to further examine issues of conflict.

It remains unclear what powers this person would have in dealing with a myriad of issues brought by former staff and the two suspended sfaff members, which have arisen over a number of years. The Department of Education has also been involved in lengthy discussions with the HEA regarding the UL case.

Sources told the Limerick Leader that while the HEA is anxious to resolve matters, it is limited in its powers, especially as universities operate under their own statutory structure.

Two women remain suspended from their positions in the finance department for over a year, while Leona O’Callaghan, who has left that department, originally brought her concerns regarding expense claims she was asked to process to the Public Accounts Committee in 2012.

She signed a compromise agreement with UL in June 2012 after being out on sick leave, while the two suspended employees were also presented with severance agreements by Arthur Cox, on behalf of UL, offering them nearly €60,000 each if they signed a confidentiality clause.

UL president Don Barry has denied that they were offered this sum on the basis of highlighting questionable expense claims and other financial concerns, and said they have been subject to a number of disciplinary hearings, including making a ‘malicious’ complaint against a colleague, which the whistleblowers strongly reject.

A UL spokesperson this Wednesday told the Limerick Leader that the university has entered mediation talks with the two employees subject to disciplinary proceedings – firstly, under the auspices of the independent statutory authority, the Workplace Relations Commission (WRC) and, more recently, with the mediator nominated by the legal team of the two employees.

In relation to the HEA’s next action, the spokesperson said: “UL is always open to the use of mediation/facilitation to help resolve any disciplinary matter or dispute”.

Ms O’Callaghan spoke out about her concerns to support the two suspended women after the article highlighting their concerns appeared in the Limerick Leader in September last.

However, she and others have been left disappointed by the latest action by the HEA.  For months Ms O’Callaghan has engaged with the HEA, Mazars and the Department of Education, but has said she cannot do so any more. “I always thought someone would come along and say ‘This is not Okay’, and despite all the recommendations in the Mazars report, nothing has happened. UL is still not accountable. It feels as if they have been waiting for us to be exhausted from the process.

“I don’t have endless supplies of energy and I can’t stay in fight mode forever. I feel sorry that I’ve allowed UL to take more from me when they had already taken so much. UL has unlimited funds and power – I don’t.

“It feels as if this has all been for nothing. My family and children have paid the price,” she told the Limerick Leader.  Since the publication of that report, she said: “UL haven’t been made to accept the recommendations, acknowledge them, put them right or apologise to anyone for what they have been through.”

Ms O’Callaghan gave Mazars numerous examples of expenses she was asked to process during her time in UL which she did not feel comfortable with, including the delivery of a fitted kitchen, and spa treatments. “I only wanted to make payments in accordance with proper policies.  I think most employers would appreciate that I was paying attention to what was above board.

She said she has been “proud” to support the suspended women, and “hopes they don’t lose the fight. I’m stepping away from this with a heavy heart, but I’ve given as much as I can.”