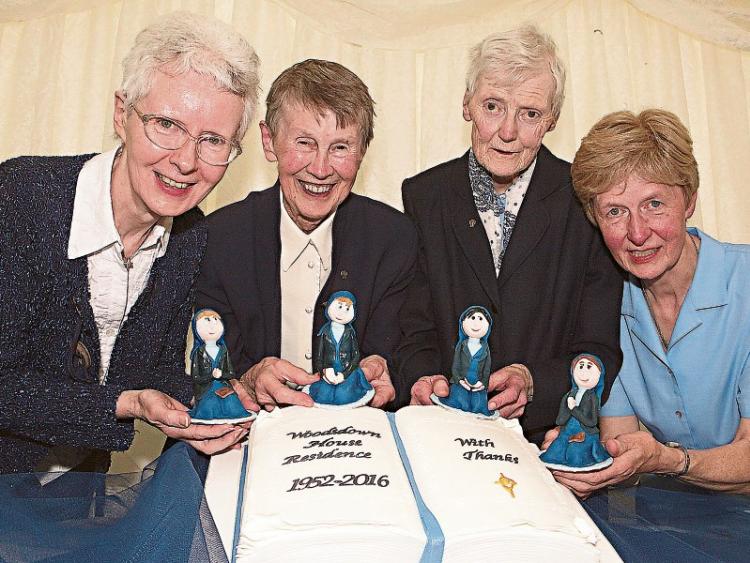 IN THE SPACE of 10 days Thanksgiving Masses were said for the departing nuns in Doon and the last Daughters of Charity in Lisnagry.

The Daughters arrived in 1952 and in the following 64 years the sisters and staff supported hundreds of people with disabilities and their families. Now the final four – Sr Kathleen Moore, Sr Breege Fahey,  Sr  Colette McLoughlin and  Sr Francis Brouder – are to leave Limerick.

In this day and age it is hard to believe that in 1952 there were no special services for people with disabilities in Limerick.

“If families needed support they had few options locally and had to consider transferring their son or daughter for residential placement in large centres in Dublin or Cork – difficult places to visit in the 1950s,” said Mr Cronin.

It begs the question why were congregations needed to establish centres like Lisnagry in the first place, he asks.

“It is recognised that religious communities inspired by core Christian values stepped in to deliver where States failed to act. The Daughters, a French order came to post famine Ireland in 1855 – to serve the poor, destitute and abandoned.

“Over the following years, they were asked by local and national authorities to become involved in a variety of social services like care of the elderly, nursing, hospitals, children’s services, schooling etc.

“Over time supporting people with disabilities became one of their larger ministeries,” said Mr Cronin. While the CEO recognises that some religious organisations have attracted heavy criticism over unjustifiable acts of neglect and abuse of people under their care.

He said as a society, “We must also recognise the great works that the majority of religious congregations did to support the less fortunate”.

“Certainly in Ireland during the 1940s and 1950s our fledgling state was more than happy to accept the support and services provided by the Daughters and others. In truth, the Governments of the day would not have been in a position to establish, organise, afford or manage the social services without the support of the volunteer religious orders at that time,” he added.

“​Those sisters must have been very courageous - they must have felt like missionaries or adventurers,” said Mr Cronin.

He said the Mass was a very poignant time for all of the Daughters, who played any part in the development of services in Limerick.

“Service users, families and staff are indebted to the many individuals who had a vocation to join the Daughters over the years, and who dedicated their lives to supporting and advocating for the rights of the less fortunate.”

As well as the physical assets, Mr Cronin said the real legacy being passed on is in the Daughters’ Christian vision of love and service and “their insistence that each person with a disability is recognised as a human being with sacred and unchallengeable rights and therefore is treated with profound respect and utmost regard”.

“I believe that the Daughters are handing over the reins to your lay colleagues safe in the knowledge that the core values and beliefs, love and service to the poor will long live on in this region, and for this we must thank you,” said Mr Cronin.