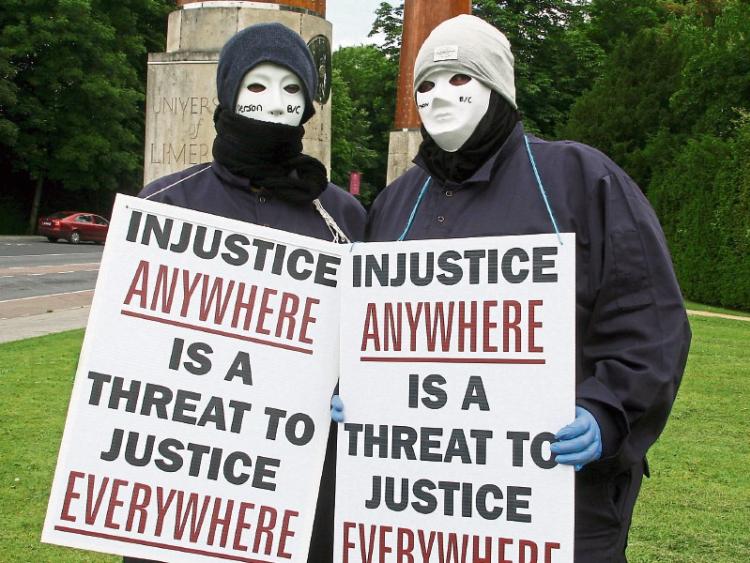 FURTHER protests due to be scheduled outside the Dail to highlight the case of two suspended University of Limerick staff have been postponed, as a concerned group hope that action by the Department of Education and the Higher Education Authority is imminent.

A number of people, including former staff, held a protest outside the UL gates last week, to raise awareness of the year-long suspension of the finance staff, as well as a range of issues of concern in the Mazars’ report regarding policies and procedures at UL.

The HEA, which commissioned the report, was also due to publicly publish responses to the review by UL, and the various respondents, which it has yet to do several months on. The two employees were suspended after an investigation described by UL as ‘independent’ found them guilty of making a ‘malicious’ complaint against a colleague, a charge they have robustly denied. The women maintain that — among other issues — their difficulties with UL relate to their querying of a number of expenses claimed by certain staff members.

The Mazars report found that they were correct to question certain payments and expenses by other UL staff, and none were ultimately processed as a result of their queries.

Fianna Fail deputy Willie O’Dea told the Limerick Leader that he believes some clarity will be forthcoming shortly on a number of matters relating to UL.

“The HEA and the Department of Education are engaging with each other at the highest level regarding the Mazars’ review,” he said.

Deputy O’Dea said that in the meantime any unilateral action taken by UL regarding the employment status of the two female whistleblowers – with the exception of reinstating them – would be “premature and extraordinary”.

“Any action that UL takes won’t trump what they [the Department and HEA] ultimately determine,” he said.

UL issued a detailed response to the protest last week, which was published on its website.

However, parts of its statement have “angered and hurt” the whistleblowers, including protester Leona O’Callaghan, another former finance staff member in UL, who also brought her concerns regarding some expenses claimed to the Public Accounts Committee in 2012.

In response to UL’s statement, the two current suspended employees said: “We, as Person B and C, have questioned the process used by the university and the independence of the external investigation where we were falsely accused of being malicious.

“The disciplinary and grievance procedures were not applied fairly in our view. We were not alone restricted from being on campus, but also had access to material pertinent to our defense denied to us by the university.”

“We have always held the view that we were denied fair process and natural justice in this external investigation - initiated and paid for by the university.

“Why would the university offer significant sums of taxpayers' monies to employees to leave their employment if there were genuine reasons for suspension or disciplinary actions or indeed if they were certain there was evidence of malicious actions?”

Evidence of the severance agreement, which the employees refused to sign, was produced by this newspaper in previous reports. It showed that both employees were offered nearly €60,000 each – nearly two years’ salary apiece – and were obligated to sign a confidentiality clauses.

“We are employed at the university as administrators on salaries of less than €35,000, we have family and other commitments, and we do not have the financial resources that the university has through state funding to be able to afford the rising costs of legal fees.

“It is highly regrettable and unacceptable that UL should continue this type of public commentary and it feels like continued harassment by the university. They are allowing it to continue because they have the resources to malign us and put us in positions that we cannot fully defend ourselves.”

UL stated that the disciplinary process involving the two staff members, who have been suspended with pay for over one year now, has been “delayed as a consequence of both the Mazars review and complaints made to the Workplace Relations Commis-sion (WRC) by the two members of staff involved”.

UL also stated that “the two individuals have not cooperated with the external independent investigations to date” – a view rejected by the employees concerned.

“In principle, the university is not in a position to comment on individual cases in order to respect the privacy of the individuals concerned but if they bring matters into the public domain then the university reserves the right to state matters of fact,” read the statement.