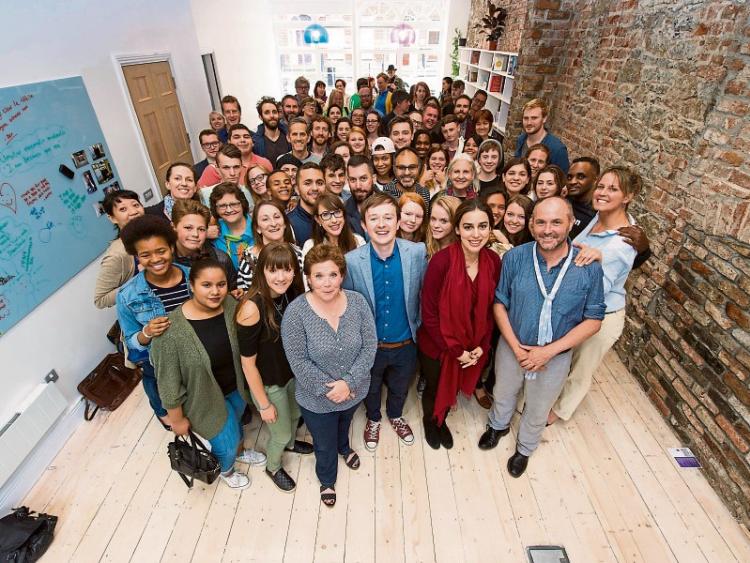 Narrative 4 storytellers and participants from all over the world celebrate the launch of its first global headquarters, O’Connell Street Picture: Diarmuid Greene

Narrative 4 is an organisation that brings together a community of artists, educators and students to create “improved empowerment and empathy” to the world, through storytelling. The launch welcomed a local, national and international attendance at the official ribbon-cutting, at 58 O’Connell Street.

N4 president and author, Colum McCann who kicked-off the launch with a reading from Frank McCourt’s Angela’s Ashes, said that Limerick is “the perfect place” for its global headquarters.

“Limerick is a town of stories and storytellers. Limerick is a humility to it. I was going to say that it is bouncing back, but it is actually bouncing forward in a pretty incredible way,” he said.

Attending the launch was N4 executive director, Lisa Consiglio who said that the Limerick base will be a “model for the rest of the world”.

Regional director, James Lawlor said that the story-exchange is “about putting yourself in someone else’s shoes”.

During the launch, there were a number poetry recitals and readings by up-and-coming and leading writers, with a live performance by acclaimed violinist, Colm Mac Con Iomaire.

N4 participant  Sarah Little, Watergate, said “this is the start of something big”.