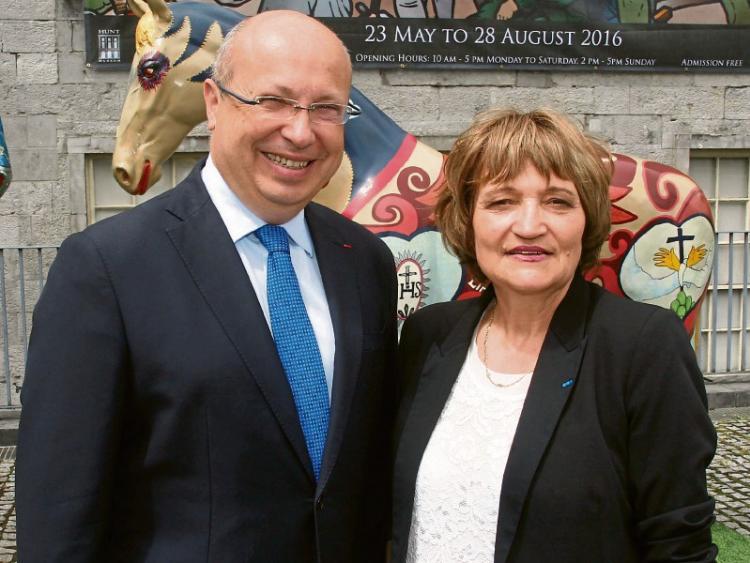 THE French Ambassador to Ireland, who visited Limerick this Friday, has commended Ireland's sporting spirit ahead of French Euro 2016 showdown this weekend.

Jean-Pierre Thébault paid a special visit to the Hunt Museum on Friday afternoon, to award the Légion d'Honneur to the honorary vice-consul of Alliance Francaise de Limerick, Marie Hackett who has been strengthening Limerick's French links for 35 years.

The Légion d'Honneur is the highest honour awarded by the French state.

Speaking to the Limerick Leader about the big game, Mr Thébault said that he is "excited" about watching the two international teams face each other, kicking off at 2pm this Sunday.

Though he was impressed with Ireland's win against Italy on Wednesday night, Mr Thébault has also found the Irish fans' spirit "extraordinary".

"It has been impressive the way the Irish fans have behaved, and it is very much noticed by everybody, by all French who have really learned to appreciate and to praise the Irish on this occasion.

"You can say that, already, Ireland has won a cup; the cup of fair play, the cup of extraordinary fans, and that matters a lot because sport can be the best, but sometimes the worst. We have seen some bad episodes that are limited in numbers, however people notice them. But it is all the more remarkable to see all the Irish fans, individually and collectively. They have expressed this wonderful fair play attitude," he enthused.

It will be the first time the Republic of Ireland will face the French, since they controversially prevented the boys in green from qualifying for the World Cup in 2009.

In relation to Thierry Henry's contentious handball that led to a French goal, he said: "About Thierry Henry, I can only quote Martin O'Neill when he said that is something that we have moved on from. It was probably a sad episode because sport must be sport. Fair play must be fair play, but whatever, this is the past. We are looking forward to this game, so that it will be a wonderful moment that people will really enjoy."

Ms Hackett said that she was "delighted and proud" to receive her award from the Ambassador, on Friday.