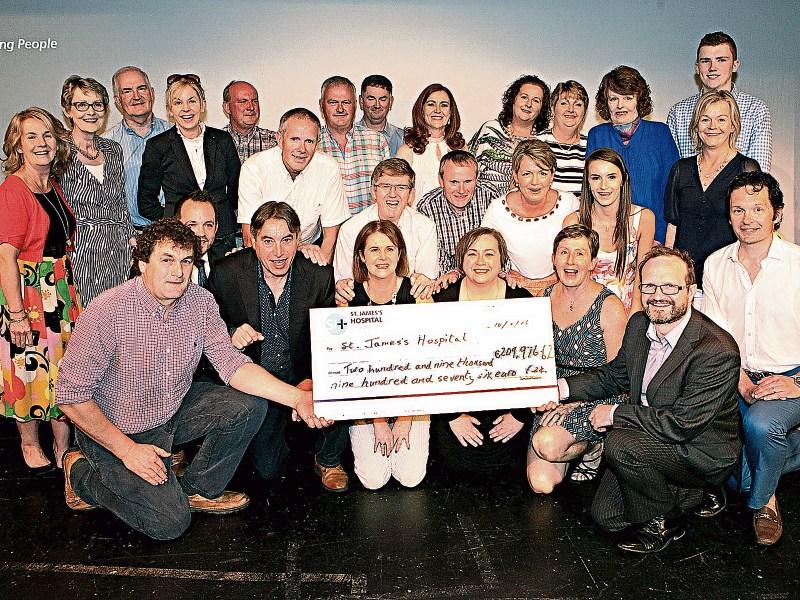 The Joanne McMahon Thanksgiving Fundraising committee and staff from the Burns Unit, St James Hospital with the cheque

THERE were cheers and a standing ovation when the final amount for the Joanne McMahon Thanksgiving Fundraiser was revealed on Friday night in Castlemahon Hall.

Tantalisingly, the amount was called out from the lowest figure to the highest, and as each figure was called out and the drums rolled, the sense of expectation mounted.

But even the most optimistic were astounded at the total: €209, 976.62. An unbelievable sum and a phenomenal achievement, which involved thousands of people across West Limerick, across the country and across several continents since the fundraiser was launched last December.

Those who had gathered for the big moment in Castlemahon Hall, where it all began, glowed. But Liam Woulfe, chairman of the 20-strong organising committee, included also the 500 people who filled in sponsorship cards, the 2,400 who took part in the walk/run and cycle on April 17 and the 163 helpers,  the 10,000 people who gave money and the organisers of the 63 feeder events which had taken place.

“Without all the magnificent skills, ingenuity, and sheer can do attitude  of each and everybody in Castlemahon, West Limerick, Limerick, all over Ireland and far beyond the success of this event would only have been a shadow of what it has turned out to be. Thank you all so much for your kindness and friendship,” Liam added.

And he spoke too of what this huge coming together of people had meant to everyone involved. “This is Ireland. This is West Limerick. This is us,” he said. And the sense of well-being in the hall went up a few more notches.

“This was a journey never to be forgotten,” he told the crowd to more cheers.

“There has been a wonderful sense of community since we began last December,” Mike Field, of Newcastle West Cycling Club said when he addressed the crowd. And he praised the “wonderful strength” that had been demonstrated by people, both individually and in coming together. “We opened up the gates so that everybody could stand up, so that everybody could get a chance to show their support.”

There were roars of approval too for Ordran Shelly, director of the Burns Unit at St James’ Hospital in Dublin when he, quoting his wife, said: “They don’t do anything by halves here.”

And he was  overwhelmed by the warmth of the  reception he and the others from the Burns Unit had received. “The sense of community is wonderful here,” he said.

“We are all here because of Joanne,” he continued. “She has made a wonderful recovery.  But she is not looking to be a hero. She certainly isn’t a victim. Joanne is a victor over her illness. You have a great role model in Joanne. She is somebody who has been a victor, somebody who has gone on to inspire others.”

But he told the gathering:  “Not only is Joanne an inspiration but all of you are an inspiration too.” The total funds raised were “immense”, he said. “It is far beyond my wildest dreams. It is just a phenomenal amount of money.” he added. “We will use it very wisely.” Fiachra O’Riordan of the St James Hospital Foundation said they would put up a plaque naming Joanne McMahon as the benefactor for the Burns Unit and would also put up a plaque in Castlemahon Hall to “forever mark your achievement.”

“It is your achievement,” he said. “It is life-changing money. St James is a huge hospital but that is a serious amount of money that will make a difference.”

The biggest cheer of the night however was reserved for Joanne McMahon when she addressed the crowd, wearing as she said, the blue and white colours of Castlemahon.

“We never envisaged a fraction of the support that we received,” she said. “The journey has opened my eyes to the kindness and goodness of everybody. We have enjoyed every minute of it. I am  lonesome it is coming to an end. I am so grateful to everybody."