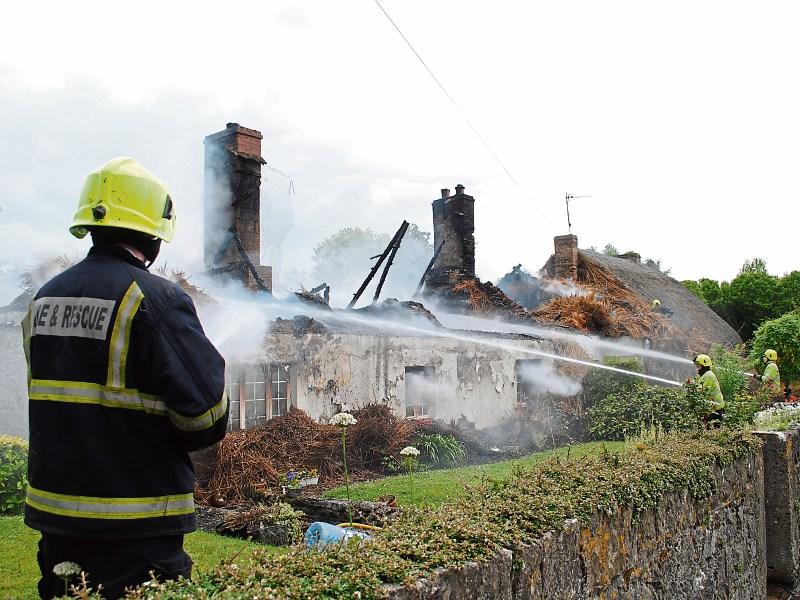 A GRANT of €16,000 has been approved to carry out repairs on an historic thatched cottage in Adare that was gutted by fire a year ago.

The funding was announced by the Minister for Arts, Heritage and the Gaeltacht, Heather Humphreys.

It comes as Limerick City and County Council approves plans to repair and reinstate the iconic cottage, and a neighbouring property, which were badly damaged by a blaze in June 2015.

They are among 11 thatched cottages which were built by the Dunraven family as staff houses in the 1800s and which have become a landmark for tourists to the village.

As the two cottages are protected structures, it was necessary for the owners to seek a Section 57 Declaration from Limerick City and County which sets out the works which can be carried out on the buildings.

It is understood that those declarations are due to be approved by the council, paving the way for the repair and reinstatement works to go ahead.

The Benson cottage is one of 57 heritage projects to receive funding under the Structures at Risk Fund (SRF) for 2016 which provides funding for protected buildings.

The fund also includes provision of just over €6,600 for preservation works on a medieval church site in Castletown Conyers, known locally as The Abbey.

The works will seek to address a number of health and safety issues on the site.

“This scheme was first introduced in 2011, and since then it has made an invaluable contribution to the preservation and protection of our built heritage,” said Minister Humphreys.

“Support for our built heritage, is vital not only for the safekeeping of Ireland’s architectural heritage, it also helps to support employment in the conservation and construction industries.”