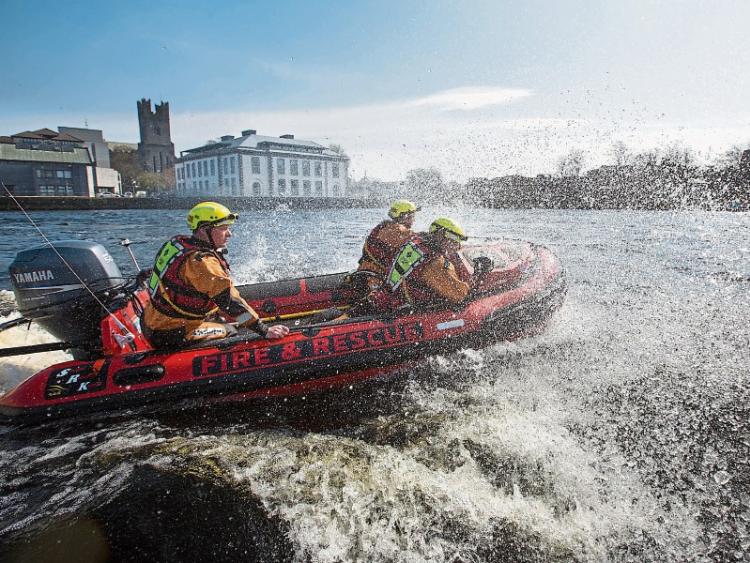 Crews from Limerick Fire and Rescue attended both incidents

Gardai have launched an investigation after the body of a man was recovered from the River Shannon this Monday evening.

The man, believed to be aged in his 30s, was seen entering the river at Harvey’s Quay just after 6pm.

Emergency services including members of Limerick City Fire and Rescue, emergency paramedics and the underwater dive unit of the Limerick Marine Search and Rescue all attended the scene.

Crowds gathered around Harvey’s Quay, as the boardwalk, and the area where the man was seen entering the water – at the step entry to the river – was sealed off.

Personnel from Limerick City Fire and Rescue maintained a presence at both Harvey’s Quay and O’Callaghan Strand on the opposite side of the river.

A recovery operation was launched as the man was submerged underwater for more than 20 minutes and was taken down stream in the tidal flow before rescuers could get to him.

It is understood another person entered the river in a bid to pull the man out, but returned to land a short time later.

Members of Limerick Marine Search and Rescue recovered the body of the male shortly after 7pm.

The man’s remains have been removed to University Hospital Limerick for identification and a post-mortem examination.

Body of a man, believed to be in 30s, recovered from River Shannon, and will be removed to UHL for post-mortem.More @Limerick_Leader shortly

Separately, a woman was placed in the care of HSE ambulance personnel following an incident at Baal’s Bridge at around 8pm.

Members of Limerick City Fire and Rescue service who were in the area at the time responded and made contact with a woman after a passerby reported that she was threatening to jump from the bridge.

However the woman, who is aged in her 40s, did not enter the water and emergency services were stood down a short time later.