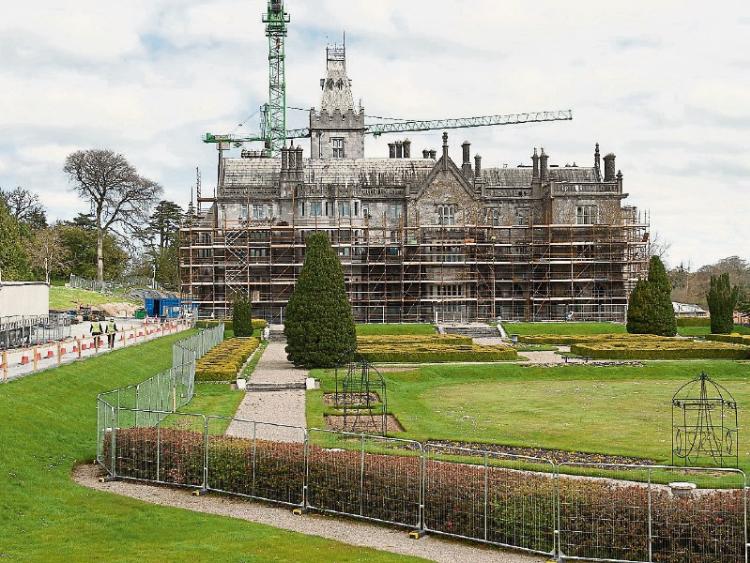 The historic Manor building wrapped in scaffolding during construction work. Below, a series of pictures showing work

A SERIES of behind-the-scenes pictures of the refurbishment of Adare Manor shows the historic building wrapped in scaffolding as the multi-million euro facelift gets underway in earnest.

Two huge cranes can be seen on the site of the new west wing which will house an extra 40 bedrooms, bringing to 104 the number of rooms which will be available when the hotels re-opens in the autumn of 2017.

JP McManus bought the iconic resort in 2014 for a reported €30m and it is understood that the work currently underway is set to cost at least this much again.

In addition to the work on the manor itself, it is understood that the golf course — which hosted the Irish Open in 2007 and 2008 — is to be significantly enhanced.

Preparations for the construction of the new wing got under way last month with the excavation for foundations and the pouring of the first layers of concrete.

The project team includes a number of restoration specialists whose job it is to ensure that the unique historic features of the manor are protected during the course of the construction work.

Among the decorative features on the building are gargoyles, dragons, griffins and other creatures from Greek mythology such as the manticora (a figure with a human head and a lion’s mane), the siren (sea creatures famed for luring sailors to their doom) and the hippocampus (an adult sea-horse often ridden by water nymphs and gods).

Even though the manor was built — over a period of 30 years — during the nineteenth century, these often fearsome looking creatures give a distinctly gothic flavour to the building.

Internally too great care is being taken to protect the beautiful features that give Adare Manor so much of its character. In the Oak Room restaurant, the elaborate wood carvings on the walls and fireplace and the wood flooring are being protected by temporary wood panelling.