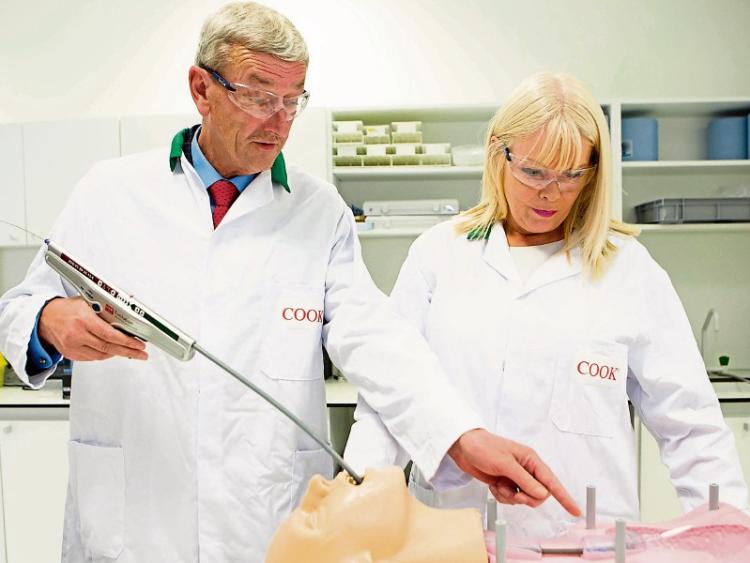 MEDICAL technology company Cook Medical has today announced 40 new jobs as it marks its 20th anniversary trading in the city.

Cook Medical, which already employs 880 people at its campus in the National Technology Park, Plassey, is recruiting for the roles in the areas of IT, engineering, data protection, manufacturing, marketing and customer services.

Bill Doherty, the firm’s executive vice-president for Europe, the Middle-East and Africa said: "Over the past 20 years, the Limerick facility has evolved from a small scale manufacturing and technology site, into a multi-disciplinary business and a hub for Cook Medical’s global operations. Our Irish operation is key to our global business and our dedicated and talented team has helped to place the Limerick operation at the centre of Cook Medical’s global success story."

Established in 1996, Cook Medical develops, manufactures and distributes medical devices to customers across Europe, the Middle-East and Africa.

The company has added 200 staff in the past two years.

The newly appointed Minister for Jobs, Enterprise and Innovation Mary Mitchell O’Connor, congratulated the team on its 20 years of success in Limerick.

She said: "I’m delighted to join Bill and his team in Cook Medical today in marking 20 years of success in Ireland. The Med Tech sector is a growing sector in Ireland as Ireland becomes a central hub for the med tech industry.  I welcome Cook Medical’s ongoing commitment to Ireland and Limerick and would encourage more companies to choose our regions as a base as I want to ensure that we encourage more job creation right across the country. I wish Cook Medical all the best for the next 20 years."

The company provides minimally invasive technologies that are designed to reduce the need for open surgery for patients worldwide.

Meanwhile, the same company is planning to recruit 50 further staff with the opening of a new data centre adjacent to its current site.

As revealed by the Limerick Leader in February, the company has submitted a planning application to Limerick City and County Council.

If passed, it will see a new three-storey facility on a 2.7 hectare site.

"If successful, the planning application means that Cook Medical will be capable of expanding its operations when required in the future," Mr Doherty added.

Earlier in the day, Ms Mitchell O'Connor attended the opening of a new logistics facility, Exertis in Raheen.

In a move which could bring up to 40 new roles to the city, Exertis is serving Regeneron's pharmaceutical plant in Raheen.

The facility will safely handle, store and distribute over 4,000 pallets of temperature and humidity sensitive bio-pharmaceutical materials.

Prior to this, the new Jobs Minister was at Thomond Park as part of a trade mission focused on local sourcing for global markets.

Attended by more than 100 local businesspeople, the event - organised by the IDA and Enterprise Ireland - saw networking between multi-national firms and SMEs.