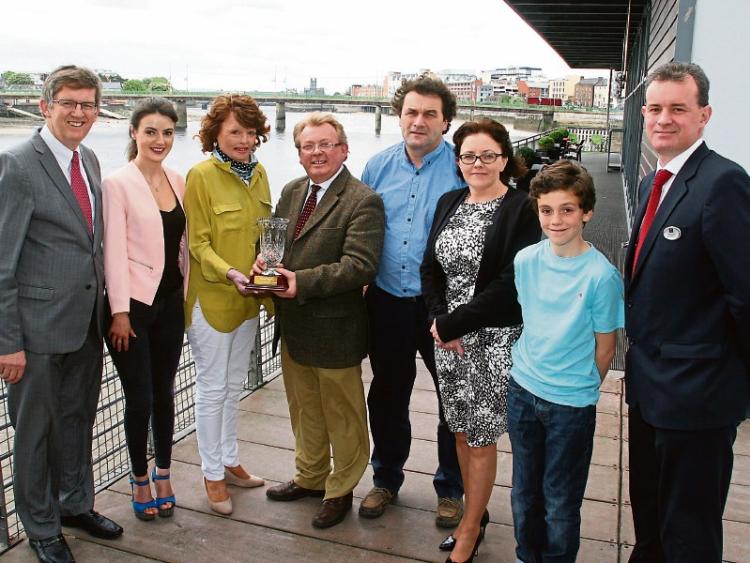 A MOTHER whose remarkable courage and fortitude prompted a mammoth fundraising endeavour which raised  €120,000 for the burns unit in St James’ Hospital, Dublin - where she spent 131 days in an induced coma - has been named the Limerick Person of the Month.

On Sunday, April 17 last over 2,400 gathered at Castlemahon Community Hall to sign in for a fundraising walk, run and cycle and to show solidarity with the woman who inspired it all, Joanne McMahon from Castlemahon.

The primary objective of the event - the Joanne McMahon Thanksgiving Fundraiser -  was to show the maximum appreciation to the burns unit for their “miraculously successful” care of Joanne after her devastating accident.

Joanne, herself a qualified nurse who lives with her husband Mike and their five children in Castlemahon, suffered calamitous burns at a post-Confirmation barbecue in May, 2014 and had to be air-lifted to Cork before being transferred to the specialist burns unit of St James’ a day or two later.

“The burns unit are, at the moment, in the process of fundraising to do up the whole unit - refurbish theatres and wards and update equipment,” explained Joanne this week at the Limerick Person of the Month award presentation at the Clarion Hotel.

“To be honest, when I was there, the service was absolutely fantastic but, I suppose, like any good place they want to move with the times and keep up-to-date. They have a very high quality unit themselves.”

Since the launch of Joanne’s fundraiser last December, in the region of 60 “feeder” fundraising events including musical events, quizzes, sports events, coffee mornings and rambling houses have been organised all over West Limerick and further afield.

Communities in Perth, Melbourne,  Sydney, Ottawa, Toronto, Chicago, Washington and London have all played their part.

“The events took place over 131 days - the amount of time that Joanne was in the burns unit,” explained Liam Woulfe, the chairman of the organising committee who also attended the award presentation.

Such was the enthusiasm for the fundraiser that once word went out, people immediately got on board - no persuasion was necessary.

“It is totally infectious the level of goodwill that is there,” said Liam.

As part of her treatment Joanne underwent several bouts of surgery with more to come. She also had to relearn how to walk and talk and continues to have physiotherapy.

Thanks to her determined spirit and the treatment she received, Joanne is back to her old self and is living life to the full.

“Things are getting back to normal. I’m giving out now again, aren’t I, Seamus?” she jokes to her youngest son who joined her at the presentation along with her husband Mike.

The 11-year-old Seamus who is a fifth class student in Castlemahon National School couldn’t be prouder of his courageous mum.

His dad Mike, is just as proud.

“She is great. She is coming on in leaps and bounds and trying to get things back as normal as possible, and bit by bit we are getting there.”

The couple have four more children Noelle, 21, Siobhan, 20, Mary,17 and Michael 15.The next step for Joanne is getting back to work.

Joanne worked as a home help co-ordinator and she hopes to get back to work before the year is out, “please God”.

In relation to further operations, she will take it a day at a time and trusts what her surgeon Dr Odhran Shelley advises.

Thoughts are now turning to June 10 when the proceeds will be handed over to the burns unit at St James’.

Joanne paid tribute to everyone involved in the fundraiser and all those who have supported her in her recovery.

Of her own courage and resilience she replied, modestly: “I think anyone in this situation just has to get on with it and that’s all I’ve done.”