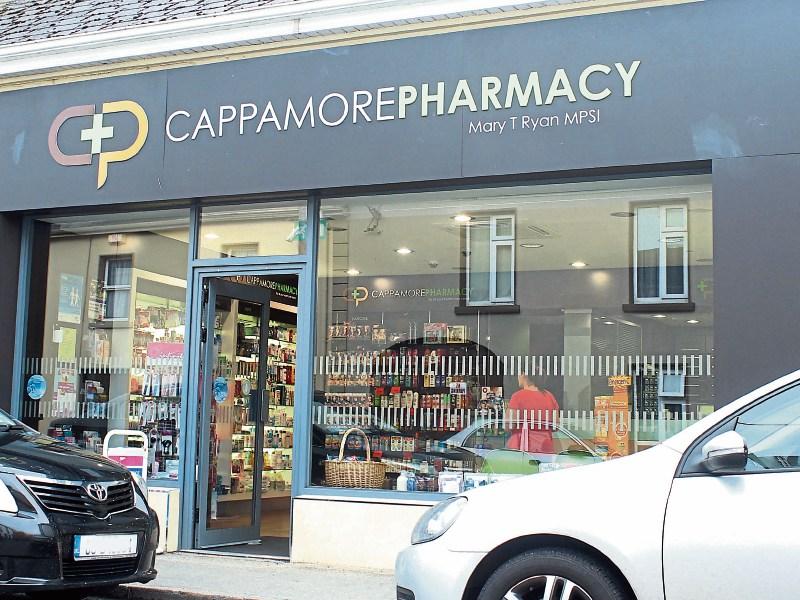 Cappamore Pharmacy on the village’s Moore Street where the thefts occurred over a four year period Picture: Michael Cowhey

A COUNTY Limerick woman, who stole €16,000 from the pharmacy where she worked, committed a “significant breach of trust and friendship”, Kilmallock Court was told this Tuesday.

He said every day a staff member carried out a report over all sales.

“On May 28, 2015, a large discrepancy was found. Following an initial investigation she [ Ryan] was seen on CCTV removing cash from the till,” said Sgt Reidy.

He explained to Judge Marian O’Leary that when a customer paid by visa for goods Ryan would place the visa slip into the till but it wouldn’t be processed into the pharmacy account. Ryan would then take cash to the approximate value of the items.

“A full review in respect of visa sales found the loss to Cappamore Pharmacy was €16,032. Cash was also being taken from tills,” said Sgt Reidy, who met with Ryan by appointment at Bruff garda station where she made a full statement on the sums of money involved.

“An aggravating factor is the defendant’s daughter is employed by Mary Ryan [proprietor of Cappamore Pharmacy] in another pharmacy.

“I did see the defendant’s bank accounts and she was not a woman doing it to make ends meet. It was not for day to day needs. She did present a cheque to me for the full amount. The employer, Mary Ryan, was a good employer. It was a significant breach of trust and friendship,” said Sgt Reidy, who handed a letter from Mary Ryan into the court.

Turlough Herbert, Ryan’s solicitor, put it to Sgt Reidy that his client comes from a very good family and it will have a big effect on her extended family.

“Yes. They live in a rural community, I imagine so,” said Sgt Reidy.

Mr Herbert said in 2009 Ryan’s marriage ended in the context of serious financial problems that her husband’s company ran into.

“She was an unsalaried director at the time. The marriage has begun to recover. Her husband is not without his own difficulties. She does not seek to make excuses, this is a serious crime - she is under no illusions.

“They were not crimes of necessity. They were to fund a lifestyle, not just of hers but of her children. The family is well regarded and this is of huge embarrassment.

“It constitutes a mark against the family that will have a generational effect. Her life is in an abyss. It is very difficult to see where she goes from here. She has sought help with this crime and has attended counselling,” said Mr Herbert.

The solicitor said when her husband’s company went into liquidation she had to endure money lenders calling to the house.

“It was an extremely stressful time. I’m not offering it as an excuse. She comes from a very good family, reared two children who are making a contribution to society and this has caused a huge amount of embarrassment to them.

“Her family have rallied around her and any further expenses occurred she will discharge. She has a lot of gratefulness to the injured party and is sorry for the emotional and damaging breach of trust. She only hopes time will help,” said Mr Herbert.

Ryan has no previous convictions and the chances of her reoffending are very slim, he said..

“She is under no illusions that a custodial sentence is looming large. She has shown remorse and gratitude to Mary Ryan and regrets she had not been detected earlier. I ask for leniency,” said Mr Herbert.

Judge O’Leary asked for a pre-sanction report from the Probation Services and adjourned sentencing until it is completed.