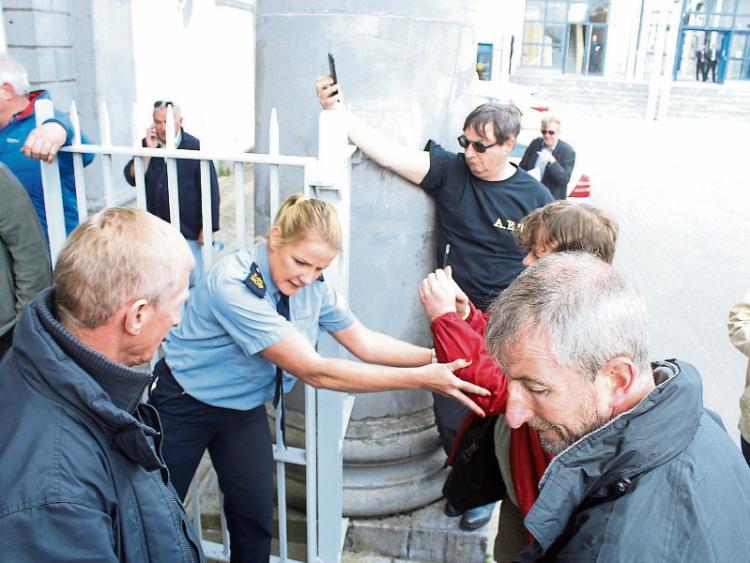 GARDAÍ have launched an investigation into the protests that led to lobby groups taking over the Limerick Courthouse and disrupting court proceedings, last week.

Last Friday, more than 100 protesters — a large majority of whom are believed to be from outside Limerick — picketed outside the Merchant’s Quay courthouse, during 169 repossession hearings that were due to take place.

During the second half of hearings, a large number of protesters forced the county registrar to adjourn the proceedings for more than an hour, as a result of jeering, taunting and chanting in the courthouse.

At least 10 individuals from various anti-eviction lobby groups filmed the courthouse protests and gardaí interactions with mobile phones and cameras, and footage was subsequently published online.

It is understood that 32 regular and armed gardaí from a number of countywide stations were deployed to the scene, and that a garda sergeant has been appointed to investigate the incident.

Following protests at the courthouse, the campaigners took to the streets and attempted to access a number of banks along O’Connell Street, including Bank of Ireland, KBC and Ulster Bank. They also picketed outside the Augustinian Church.

Gardaí were deployed to Ulster Bank to assist management in closing its front doors for an hour, in order to prevent the lobbyists from accessing the building.

The president of the Limerick Solicitors’ Bar Association, Daniel J O’Gorman wrote to the Limerick Leader this week to condemn “the scenes of anarchy”.

Mr O’Gorman, who was present on Friday, said that protest is an “important and fundamental right of living in the democracy and society”, but that the people involved in the court take-over “bring shame to the word ‘protest’”.

“He had to flee from the bench, hurriedly followed by other members of the court staff. These were people who were simply doing their jobs and carrying out a public service. They did not ask or volunteer to be there. Members of the gardaí and the legal profession were subjected to behaviour that was inappropriate and degrading,” he stated.

He said that the incidents were both “shocking and frightening.

“In short, a courtroom of this State was taken over by persons who were clearly bent on chaos and that’s what they achieved. There have been reports and photographs of what occurred at the courthouse Limerick last Friday which do not go any way to describe what went on.

“A challenge of this nature tugs at the very fabric of our society. The courts of this country have often been the last hope for many a disadvantaged and dis-enabled citizen. If the pathway to our courts is impeded or blocked, our society is in danger.”

Local activist Greg Doran, who took part in the protests outside the courthouse, defended the actions of the lobby groups, and said that they received “a great reception” going through the city.

He added that criticism and complaints about the protests were expected.

“We are all labelled as protesters who don’t want to pay for nothing, that we just want to cause trouble. But the average age there was 50. It wasn’t a shower of lunatic left, young fellas trying to create war. There were genuine people there who suffered because of evictions, who are stressed out because of evictions.”

He said that people when they go to repossession proceedings “are treated like statistics” and that “solicitors are not doing the jobs that they are paid to do”.

“I was surprised by the reaction that we got from this. It was the like water charges. First, they laugh at you, then try criminalise you, and then you have them on the ropes. This is the same with this and every other movement we are going to do after this.”