Thousands take part in Darkness into Light events in Limerick 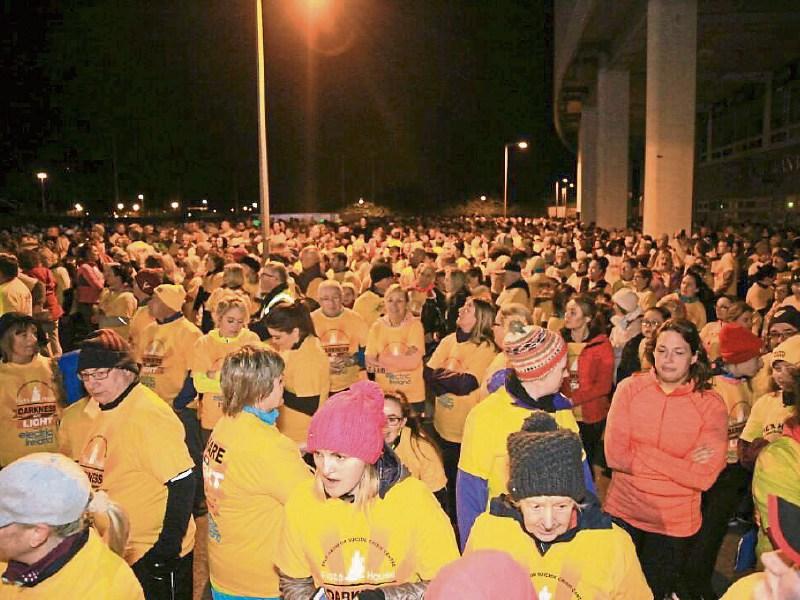 UP to 15,000 people took part in Darkness into Light events across Limerick during the early hours of this morning.

Walks took place in Limerick city, Kilmallock and Newcastle West with all of the proceeds going towards Pieta House.

The route saw participants – most of whom were wearing yellow t-shirts –  walk along the quays and over both Sarsfield Bridge and Shannon Bridge before returning to Thomond Park.

“We are absolutely thrilled, it’s just incredible to think that at 4am more than 10,000 people came out of their beds and walked in support of Pieta House and walked from darkness into light,” said Johnny Togher, a member of the organising committee.

Candle-light messages of “hope” were placed along the route which was marshalled by gardai and a team of volunteers including members of Corbett Suicide Prevention Patrol and Limerick Marine Search and Rescue.

Men, women and children, many of whom have been directly affected by suicide, from all parts of Limerick  took part in the walk with most finishing before 5.30am.

“We are just here to show solidarity with people who have problems and just to say thanks for our own  good look. It’s fantastic, I think it’s fantastic and I just think everybody is in solidarity with the people who  have suffered and who are suffering,” said Maura Walsh from Cappamore who took part with her husband  Ignatius and daughter Elaine.

John Cronin from Broad Street, who lost a number of friends through suicide, also took part in the walk.

Meanwhile, hundreds of personal and poignant messages were written on a Banner of Hope which was erected by the organisers of the walk at Thomond Park.

One message stated “Live it, Love it, speak about it. That’s what life is all about” while another read: “We all need hope and when times are hard we need to hang on to this thought”.