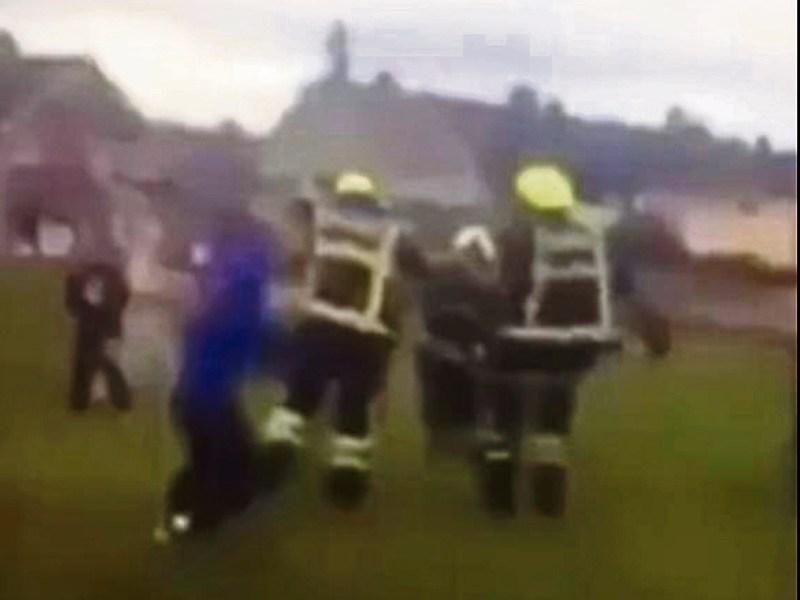 A screengrab of mobile phone footage of the incident

GARDA sources have indicated they are confident of catching the youngsters who attacked members of the fire service in Garryowen.

Fire crews responding to a routine bonfire call were set upon by a gang of 15 youths, some as young as 13, when they arrived in the estate on Sunday.

They attacked the emergency service personnel with planks of wood, a shovel and rocks, and also hurled a rock through the front window of a fire appliance.

But the Leader understands that due to the quality of the closed-circuit television in Garryowen, the perpetrators are identifiable.

“The CCTV is clear, fortunately,” a source told the Limerick Leader.

With the garda investigation in full swing, the fire service has not been able to comment any further on the incident, which has been roundly condemned across the city.

Meanwhile, Sinn Fein councillor John Costelloe has called for a meeting with Chief Superintendent Dave Sheahan, claiming “minors, as young as eight” were “wandering the streets in gangs of up to 20 causing general mayhem to visitors and locals” at the Riverfest celebrations.

And a Limerick Leader photographer has spoken of how a youngster  in Garryowen hurled a rock at his car just hours before the attacks on the fire service staff.

Michael Cowhey travelled to Garryowen to take pictures of the remains of bonfires on the green.

He said he was questioned by a boy in a gang of three and estimated that they were aged between 10 and 12.

”He asked me who I was, and I what I was doing. I said I was taking a picture for the Leader. He went away. But when I got into my car to leave, he threw a rock which hit the back of my car,” Mr Cowhey said.

Cllr Costelloe said both he and local residents observed gang of youths in Nicholas Street.

Although the northside councillor called the gardai twice, as did a number of local residents, he claimed they did not arrive.

“There has been a number of failures that led to these youth acting above the law but in the short term only proactive policing will allow the authorities to achieve the space to comprehensively deal with this recurring problem,” he said.

Cllr Costelloe blamed budget cuts by the last government resulting in fewer gardai on the street over the Bank Holiday weekend.

He added: “It is unacceptable that an unrepresented minority should hold the decent people of Limerick to ransom by such unacceptable behaviour.”