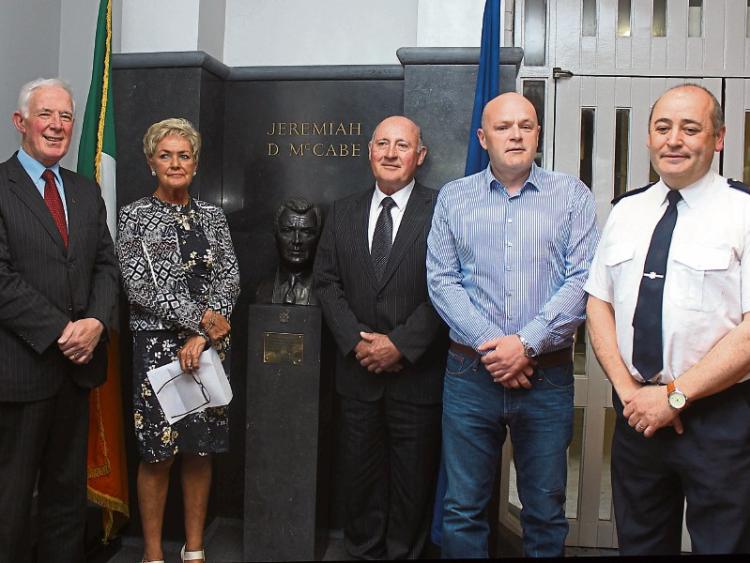 NEARLY 20 years have passed since the killing of Detective Garda Jerry McCabe in Adare, but the passage of time can't erase his memory and will never heal his family's loss, his widow has said.

Ann McCabe was speaking in Henry Street garda station in Limerick city, next to a bust of her late husband, where she and members of An Garda Siochana announced that a charity memorial concert will be held in Limerick later this month to mark his passing.

“It hasn't [become easier]. It never goes away, and I wouldn't wish it on anyone else. We have lost other gardai in the meantime, and they will never be forgotten.

“We have to thank the members of An Garda Siochana who keep us safe in our beds at night, and wish them safety for themselves, each and every one of them, because they put their lives on the line so we can sleep safely in our beds at night-time,” said Mrs McCabe, a mother of five and grandmother of six.

“I had one grandchild at the time [of Jerry's death], now I have six, one girl and the rest are boys. He's missing out on that because he was a great family man, but I'm sure he's looking down on all of them. We speak about him all the time,” she said.

Mrs McCabe is a past president of the Garda Survivors Support Association, which meets once a month in Dublin, and she encouraged others who have been bereaved to come forward to cope with their loss.

“I wasn't that young when Jerry died, too young for me, too young for Jerry, to lose him. But we have a wonderful group going and anyone who has lost somebody in the line of duty they're welcome to join our group,” she said.

She also praised the general public in Limerick, who she said “have been unreal to me.

“I cannot describe how great they are. There isn't a day that goes by in Limerick that I don't meet someone [ who remembers Jerry].”

She also paid tribute to Jerry's colleague, Ben O'Sullivan, who was with him in Adare the day he died and miraculously survived, during the attempted robbery of a post office van.

“This concert is a wonderful tribute to Jerry and Ben, who's lucky to be alive with what he went through. Sadly Jerry wasn't that lucky. They [who committed] this act are no longer part of my life,” she said.

“Members of An Garda Siochana have been of great support to me and my family over the past 20 years, and I thank them from the bottom of my heart for their kindness and solidarity. A special thank you to Jerry's colleagues, in particular Ben O'Sullivan, who is living life now as best he can, bearing in mind the awful injuries inflicted on him in the terrible circumstances in Adare 20 years ago.

“My family and I will be delighted to support this concert in every way, and I wish Supt Smart and his committee every success in promoting this event. I hope it will be a very successful and enjoyable event for all involved,” she said.

Mr O'Sullivan, now 72, and living in Corbally, was overcome with emotion as he remembered his friend and colleague.

“I have learned to live with it, but I cannot change it. What I wouldn't give to have Jerry still alive, but that is an impossibility.

“It's a day mixed with joy and sadness every time I come here I'm reminded, though I don't have to be reminded because I will never forget... Jerry's bust here besides me always reminds me of 20 years ago.

“Looking back it seems like 20 days because it's so fresh in my memory, we wonder where 20 years have gone, but I suppose time and tide waits for no man. I'm delighted really that the McCabe family have recovered to the extent that they have from that enormous shock, and God rest Jerry's soul,” he said to applause.

Mr O'Sullivan said he wanted to thank the organising committee for “acknowledging the atrocity that took place 20 years ago, remembering the tragic loss that the McCabe family suffered and not allowing it to go unremembered.”

Limerick based auctioneer Pat Kearney, who is married to Eileen McCabe, Jerry's sister, and was best man at the wedding of Jerry and Ann, said it's a great honour for the family.

Superintendent Derek Smart said that the memorial concert will take place in advance of the 20-year anniversary of his passing “during the execution of his duties” on June 7, 1996.

The concert will be held in the University Concert Hall on May 26 at 8pm, which will feature the Garda Siochana band, as well as special guests Brendan Grace, the Unity Gospel Choir, and Oliver Stapleton.

Tickets are now on sale via the ticket office in UL and are priced at €20. All the proceeds from the ticket sales will go to local charities, including Adapt House, Milford Hospice, the Laura Lynn foundation, and a number of others.

“This 20 years is very important - that we don't forget and celebrate the life of somebody who was a dear friend to all of us here, and to his family,” said Supt Smart.

Pearse McAuley was sentenced to 14 years in prison for his part in the killing of Detective Garda Jerry McCabe. The Tyrone man was one of four IRA men who pleaded guilty to the manslaughter of Det McCabe.

He was collected from prison by Sinn Fein TD Martin Ferris in 2009, having served just 10 years of his sentence. Along with Michael O'Neill, Jeremiah Sheehy and Kevin Walsh, Mr McAuley had been charged with murder but the charge was dropped when key witnesses refused to co-operate after IRA intimidation.