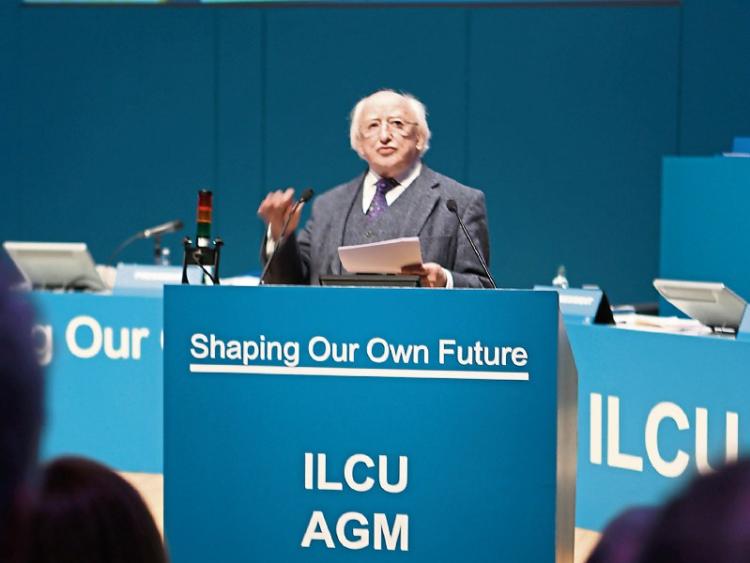 President Michael D Higgins addressed a crowd of more than 1,500 Credit Union members from 431 branches at the UCH

PRESIDENT of Ireland Michael D Higgins addressed a large crowd at the University Concert Hall, in UL, where the annual general meeting of the Irish League of Credit Unions took place.

More than 1,500 members, from 431 nationwide branches, discussed the future of the organisation at the conference.

He started his address, discussing the difficulties that came about when the cooperative movement and the Credit Union first began in Ireland.

“Public opinion was hostile and consmer cooperation initially unachievable. The Credit Union movement was the result of innovative thought, a collective will and a real desire to praticipate in the enabling of positive and far reaching change,” he commented.

President Higgins commended the organisation for its involvement in economic activities over the past 30 years “in assisting developing countries in establishing their own credit unions and other cooperative type organisations.

“May your philosophy of solidarity, cooperation and care guide you,” he added, when mentioning the Union’s future challenges.

“I am absolutely convinced that there is no such thing as any simple binary choice between care and solidarity on the one hand, and efficiency and competition on the other. You can have both.”

He said that the “spirit and ethical code” that drove the Union to success can be applied in the future of the organisation.

“We know that we cannot go back to doing things in the same way as we did before. We need new forms of working together that will transcend the shortcomings of our recent experience.

“In a new social economy we will need models like the co-operative movement, built on democracy, mutuality and the value of service; models which enable people to work together, pooling their skills, proactively engaging with their community and placing solidarity and the collective welfare above any self serving individualism.”

“Like all major and valuable contributors to society, the Credit Union movement is called on continually evolve, adapt and reimagine. There can be no doubt that, following the recent enactment of new regulations, you are facing a time of radical change and transformation.”

He concluded that the Union will “continue to provide a service built on true participation and shared interest.

“Your efforts are an inspiring example of how economic viability can be pursued in partnership with social responsibility, bringing into balance the needs of members and the community.”

ILCU president Brian McCrory said that the event was “focused on how credit unions can grow and change to best meet the growing needs of their members”.