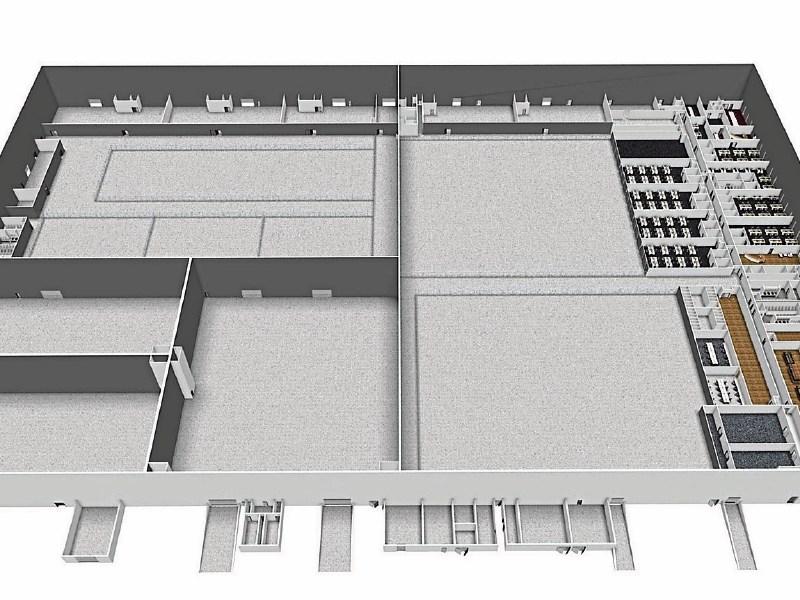 A drawing of the facilities on offer at the Limerick studio

LIMERICK’S Troy Studios has confirmed that it has a deal in place with Pinewood, home to Star Wars and James Bond, to handle its international bookings.

The studio, which has leased the old Dell building in Castletroy from Limerick City and County Council for the purposes of transforming it into a major film and television production hub, also confirmed that it expects to open its “state-of-the-art studio facilities” this summer.

Troy said in a statement issued to the Limerick Leader that it was “delighted to confirm that Pinewood On Location platform has been appointed to market and handle bookings for the studios internationally”.

Pinewood On Location, it said, was a “well-known global brand with specialist sales studio expertise in the film and tv area”.

The company – Troy Studios Limited – pulled in funding of €2.7m earlier this year and said its facilities extended to “340,000 sq. feet of high-specification sound studio and support facilities for film and television productions, providing the perfect set-up for large scale movies and/or high-end television series”.

The Limerick Leader reported in July of last year that Pinewood was eyeing up a deal with the studio, which has been visited by big name producers since the deal was struck with the local authority last summer.

Troy, according to promotional material on the Pinewood website, offers three sound stages, support facilities including workshops, production offices, a 5 acre backlot, water tanks, “nine ‘star dressing rooms’, en suite and ten single dressing rooms”, a restaurant with seating for up to 280 people, an extras “holding area” and parking for 800 cars and trucks.

The studio is likely to employ 6-10 full time core staff on site, with up to 500 staff employed during production, which will typically last 3-9 months depending on the project.

It is anticipated that, of these, 350 would be full time staff and 150 would be extras on a typical production.

The principals in Troy – Siún Ní Raghallaigh, Ossie Kilkenny and John Kelleher – signed the long-term lease agreement to take it over and develop a media hub for film and television production.

The trio are also key figures in Ardmore Studios in Wicklow, where series such as Penny Dreadful and Vikings are filmed.

Limerick council boss Conn Murray has previously estimated that the facility could result in a €70m spin-off for the local economy, creating upwards of 750 jobs.