When the Irish Volunteers were stoned on Limerick's streets

On the 50th anniversary of the Rising, the Limerick Leader recounted a riotous occasion in the city on Whit Sunday 1915. Below, we reproduce that article from April 9, 1966 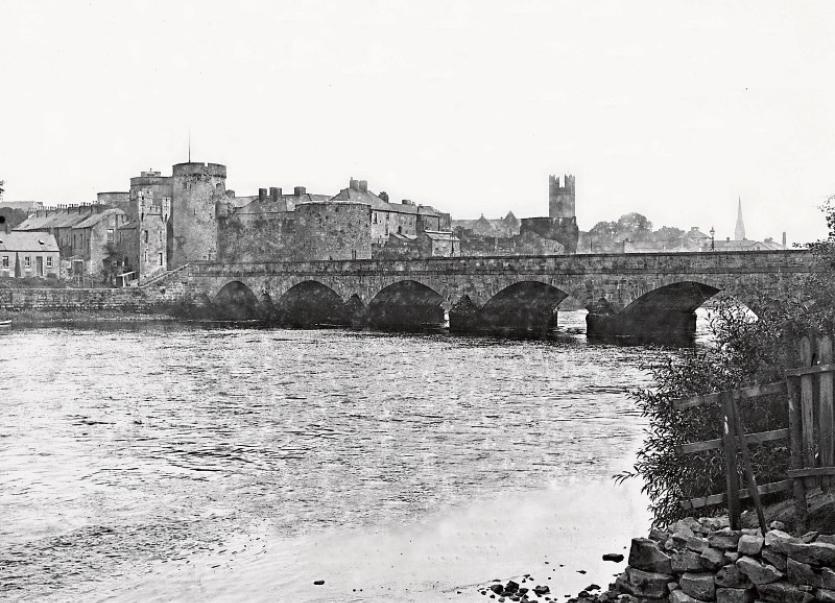 The Volunteers crossed Thomond Bridge, but faced violent opposition during their 1915 march through the city

IN the excitement of the Easter Rising Commemorative Ceremonies, it may be easy to forget an incident which occurred in Limerick in May 1915, and in which such prominent Sinn Féin Volunteers as Padraig Pearse, Ned Daly and Eamonn de Valera were involved. These men, later to become National heroes, were stoned while leading the great Irish Volunteer parade of Whit Sunday, 1915, through Mungret Street and Broad Street.

The incident, for fairly obvious reasons, has been but rarely referred to in the years between, but it is worth remembering in that it reflects the highest credit on the discipline of the Volunteers, and shows that these men were not afraid to express their national convictions in a time when it was not fashionable to be patriotic.

Over a thousand Volunteers and Fianna Scouts from Dublin, Cork and Charleville travelled to Limerick by special excursion trains for the parade and they were joined by about 150 of the local body in the city. The Volunteers wore uniforms and were fully equipped  and included in their number such prominent members of the organisation, such as Perase, Tom Clarke, Willie Pearse, Liam Mellows, Sean McDermott, Ned Daly, Terence McSwiney, Seoirse Clancy and Thomas McCurtain.

Everything went well until passing through Mungret Street, where the Volunteers got a hostile reception. In this locality, which includes Watergate and Palmerstown, they were loudly boohed and stones were freely thrown.

For a time the situation looked very threatening; a number of blank shots were fired in an endeavour to check the violence of the women, girls and boys who had attacked the Volunteers with all sorts of missiles.

The marchers, however, maintained the highest discipline and, though a few of their number had been injured, the parade was continued along by Broad Street, where the attack was again resumed. A shower of stones was fired into the ranks of the Volunteers, who, however, kept their temper and the march continued without further incident.

While the men paraded through the Irishtown district, hearty cheers were raised for the Munster Fusiliers and other Irish regiments by the crowds on the sidewalks, who had relatives and friends in those units fighting at the front.

In other parts of the city, things were rather quiet, having regard to what happened in the Mungret Street area. However, there were isolated attacks on the Volunteers, who in a few instances drew their revolvers but did not use them. Several had to obtain police protection from the crowd, which became more demonstrative as the as the day advanced.

In Davis Street a number of ladies wearing the Sinn Féin colours had to take refuge in a licensed premises from the mob. An officer of the Dublin Brigade, Captain Eamon de Valera, went to their assistance and he and the ladies were later rescued by a party of Limerick Volunteers.

Long before the departure of the Cork and Dublin trains, a large mass of people congregated in front of the railway station, the approaches to which were barred and held by a number of officials, who refused admission to all except those holding tickets.

Some time before seven o’clock, the Cork Volunteers marched up and were received with boohs and jeers. The mob became almost unmanageable; stones and bottles were thrown at the visitors, who only succeeded in getting through into the station yard after a desperate struggle. Shots were fired and the butts of rifles used by some of the Volunteers to beat off the hostile attentions of the attackers.

It was only when the Dublin section of the Volunteers made their appearance that the disturbances reached their height. In the scrimmage, seven rifles were wrested from the Volunteers. The Limerick Volunteers, under Comdt MP Colivet, remained under arms at the Fianna Hall during the time the Dublin, Cork and Tipperary brigades were being marched to the station, and were actually on their way to assist their comrades.

Their intevention, however, was not necessary. A number of the local clergy, particularly Rev JM O’Connor, Rev Fr Bernard, OFM, and Rev Fr Mangan, CSSR, Spiritual Director of the Arch-Confraternity of the Holy Family, did valuable work in pacifying the crowd, and when the last train had left at 11pm, order has been restored.

Later that week, a meeting of the whole House Commitee of the Limerick Corporation thanked the clergy, who by their presence and influence were highly successful in restoring order at the Railway Station. The Committee deplored the conduct of the women in the Irishtown “as it might cast a slur on the good name of the whole city” and paid a high tribute to the Volunteers, “who showed great restraint in not retaliating under the provocation they received”.