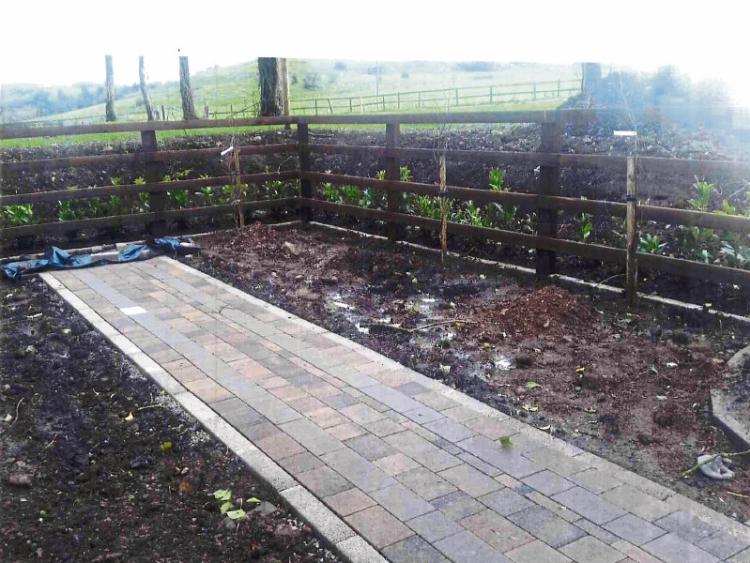 A MEMORIAL garden which illustrates the dedication by the community of Grange to the history of Ireland will be unveiled at a special opening ceremony on Sunday, April 24 at 2pm.

The idea for the 1916 memorial garden was first mooted at a meeting of Grange Cross Residents’ Association (GCRA) when they were discussing ideas on how to improve Grange and its environs for the benefit of all in the community.

Patrick O’Sullivan, Lough Gur house kindly donated a small area of woodland beside the church to facilitate the project.

“Lough Gur house is synonymous with local history and indeed was the meeting place for the IRA volunteers the day of the historic Grange Ambush.

“All information about the house and indeed all local history of Grange was recently published in our very successful Grange Book which will also be available for purchase on the day,” explained Miriam Gallagher, PRO, Grange Cross Residents’ Association.

The garden project work was overseen by members of the GCRA.

The garden was designed by the association and plans were drawn up.

The gardens consist of a cobbled pathway, kindly supplied and laid by Willie Lawlor to whom the committee are very thankful.

There are also seven trees to commemorate the seven signatories of the proclamation, and two natural stone monuments commemorating the Rising of 1916 and all who fought and died for Ireland at this historic time.

The garden is beautifully laid out with lawn and hedging to finish off the completed look.

Two flags will be flown on the day of the opening, the Republic's Tricolour and the 1916 Flag.

“The garden is for all members of the community and shows a dedication by Grange people to the history of Ireland and also to the local people who lived and died for Ireland,” said Miriam.

The ceremony on April 24 which is open to the public will include a parade featuring the Armed Forces and The Retired United Nations officers.

Representatives of all local clubs and associations have been invited to participate.

The noted historian and author Tom Toomey will give an oration in English and the Irish oration will be given by Eamon O’ hOgain.

The official opening of the garden will be performed by Minister Michael Noonan.

“Traditional live music will be playing throughout the ceremony and local resident Triona  Daly (O’Donnell) will be gracing us with her amazing voice,” said Miriam.

The laying of wreaths at the ceremony will be done by local people and relatives of those who died in the Caherguillamore shootings of local volunteers by British Forces.

Refreshments will be available on the day and the committee have worked tirelessly to put on an entertaining and informative event which includes a memorial pamphlet which everyone is invited to take home with them as a remembrance token from the day.