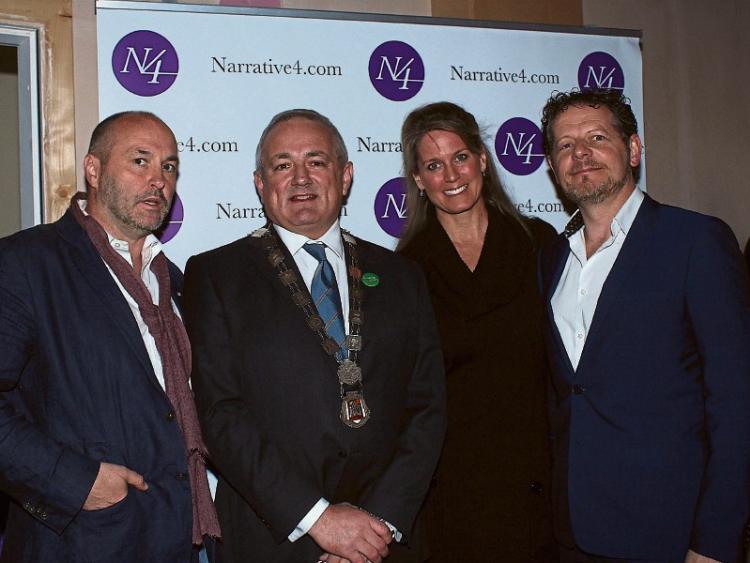 ASKING invited guests to “use their imagination”, Narrative 4 executive director Lisa Consiglio detailed plans for the arts-education organisation’s first base outside the US.

The group, which was co-founded by Consiglio and author Colum McCann, has taken over the former library building at 58 O’Connell Street as its ‘global headquarters’.

The Narrative 4 team, which is backed by Amazon founder Jeff Bezos and Star Wars director JJ Abrams – among others – and promotes social change through storytelling, showcased its ambitious plans for the building, which it hopes to have open in time for its global summit in June, part of which will be held in Limerick.

Ms Consiglio admitted that it remained “very raw”, but would become “the most incredible, imaginative space”.

“Limerick has received us with open arms in many ways. You feel it is on the brink of something so spectacular – sort of like this space, you know it is going to be spectacular. There is something raw about Limerick right now, that is so beautiful because you know that it is going to explode.”

Author Colum McCann agreed, saying: “I honestly feel that Limerick is ready for something like this. Limerick has a sort of non-entitled mentality, and the people here have been generous to us, they have opened up their arms - it is a Limerick project.”

Of the plans for the building, he said it would become “sort of like a small United Nations for storytelling”.

“We will be bringing kids from Mexico, all over the US, Israel, from the West Bank, Belfast, from Limerick - actually all over and they will all be gathering here. I think that, in a couple of years, you will walk in here and you will see a microcosm for how Limerick is sort of looking outwards.

Former secretary general at the Department of Finance, John Moran, who has been centrally involved in bringing Narrative 4 to the city, praised the support the project had received, particularly from the local authority and UL, “for what we are trying to do, which is to transform the library, where people exchanged books, into a place where people are now going to exchange stories”.

“It is really fabulous to have that right downtown, in the city. The thing about Narrative 4 is that it is supported by some very influential people, but it is a simple idea that is so transformative,” he explained.

“This jump now across the Atlantic comes at a time when Europe really needs some ways to break down barriers. We are seeing a lot of fear. And for Limerick to be able to play a part in that, means that we can actually play a really transformative role across the whole of Europe,” he added.