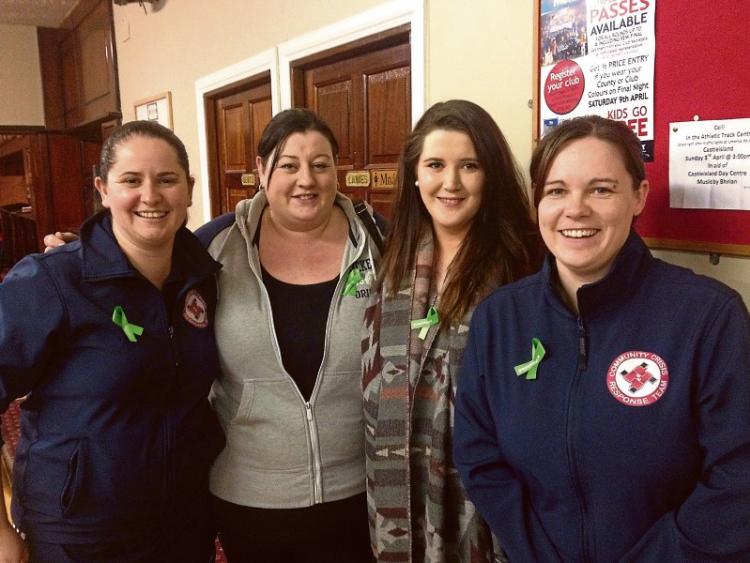 AS many as five calls a day are coming in from people who are suicidal and in emotional pain, the founder members of a new voluntary crisis intervention service revealed this week.

Community Crisis Response Team (CCRT) was set up in West Limerick in early February by Askeaton woman Caitríona McMahon and Kayla Cooley from Limerick with the aid of a donated phone and social media.

“It stemmed from an idea and a Facebook page,” Kayla Cooley told the Limerick Leader.

Both women attended a meeting of local councillors in the Adare Rathkeale Municipal District to explain what they do and to get the backing and support of councillors.

And last Sunday, Askeaton community hall was packed out in a lighting-up ceremony designed to shine a light on suicide. A similar event is planned in Abbeyfeale this weekend.

The distinctive feature of CCRT, Caitríona McMahon said, is that volunteers will travel to meet up with a person who is suicidal.

“There are no other services that will call out to you,” Caitríona explained. “A  lot of services are closed at night and it is great to have a service that comes to you if you are suicidal or distressed.”

“We wanted to be a friendly face,” she continued. They also act as a bridge, she said, connecting people up to services such as Pieta House and will accompany people to their first visits if that is what they want.

When a crisis call comes in, she explained, two trained volunteers will go to meet that person and the golden rules are connect, listen and put the safe plan in place.

This type of intervention is not easy, Kayla Cooley acknowledged, but she has come to the conclusion it is necessary.

To date, the service, which operates from 5pm to 6am, seven days a week, has been run by the two women, who have been joined by two others, Naomi Healy and Tracy O’Rourke.

But Ms McMahon told councillors on Monday there are up to 20 people who have volunteered to get involved who are waiting to get the training they need. “That is gut wrenching,” she said explaining that Safe Talk Training and the Active Intervention in Suicide Training is provided by the HSE.

“There is a huge need,” Ms McMahon continued. “So many people are in emotional pain and they don’t know where to turn.” But, she added: “We couldn’t do it without people in the community who keep an ear out.”

Ms McMahon also highlighted the high level of self-harm among people contacting them.

The cost of petrol etc has been met by the volunteers themselves up to now. But CCRT is hoping to get a charitable status number within the next few weeks. And they are looking for support to pay for equipment such as sat-navs as well as installing light-boxes with the crisis number in areas of high risk such as piers. They also hope to acquire some kind of base. Councillors at Monday’s meeting commended the volunteers for their work and pledged support.

Meanwhile,  CCRT has teamed up with student  David Boyce to organise a community based series of events highlighting suicide and mental health called West Limerick Goes Mental which got underway in Askeaton on Sunday night when Katie Whelan of Lisa’s Lights led a lighting up ceremony. It has been followed by talks from Console and with Funk It Up positivity talks.

If you want to contact CCRT, the crisis number is 085-1777631,  you can email ccrtlimerick@gmail.com or go to Facebook