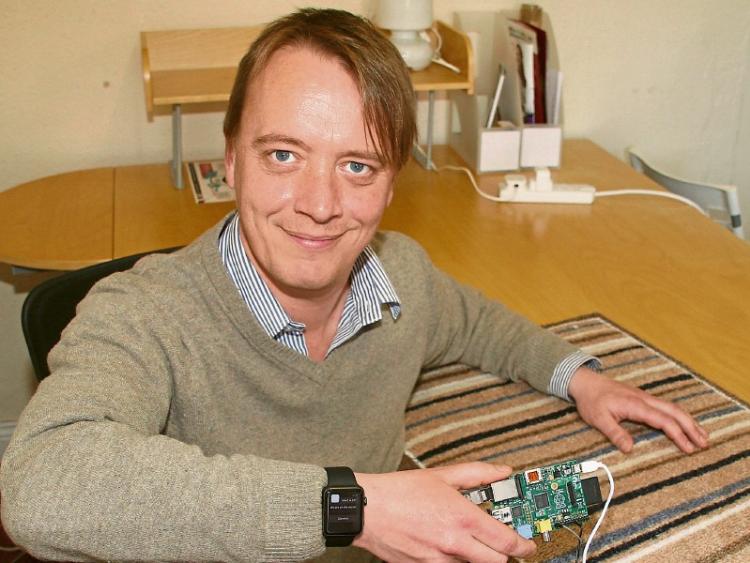 Thomas Bibby shows off his creation, an internet-driven pressure switch that notifies his watch when triggered by touching a doormat

A LIMERICK software developer has created a unique, internet-monitored doormat device to help families who are caring for loved-ones with Alzheimer’s disease.

Entrepreneur Thomas Bibby, from Farranshone, who runs a business in the city centre, developed the mat for his friend, who is caring for her father with Alzheimer’s.

“One of the challenges she faces is not being able to go out with her husband for a drink after he has gone to bed, in case he wakes up confused,” explained Thomas.

“I put together an internet-connected mat to place outside his door which would notify her phone if he left his room. This allows them to go and have an hour’s break, secure that they will be notified if her dad has any disturbances,” he said.

Mr Bibby, 36, was able to develop this by connecting a small computer — called a Raspberry Pi — to a pressure mat, which is then placed underneath a regular doormat.

The computer, through coding, is then connected to a server, which then connects to a mobile device. In this case, he was able to connect the mat to a watch and a mobile phone.

Mr Bibby, who is CEO of Reg Point of Sale, on Mallow Street, published a detailed step-by-step on how he created the product, via www.thomas.bibby.ie.

According to his post online, he said that he would like to develop on the idea in the future. He said that the Raspberry Pi computer can be battery-powered, and will not need “trailing wires”.

He added that, with further development, the programme will be able to show how often night interruptions are occuring with the person.

“A lot of people have said that they see commercial potential in the idea, and it’s something I may look at in the future, but for now I’m just happy to have helped out a friend and to have released the code for anyone to use,” said Thomas.

He said that he was “delighted” to be included in the Sunday Business Post’s recent Hot 100 Start-Ups list.