Thousands to participate in Thanksgiving Fundraiser in Castlemahon 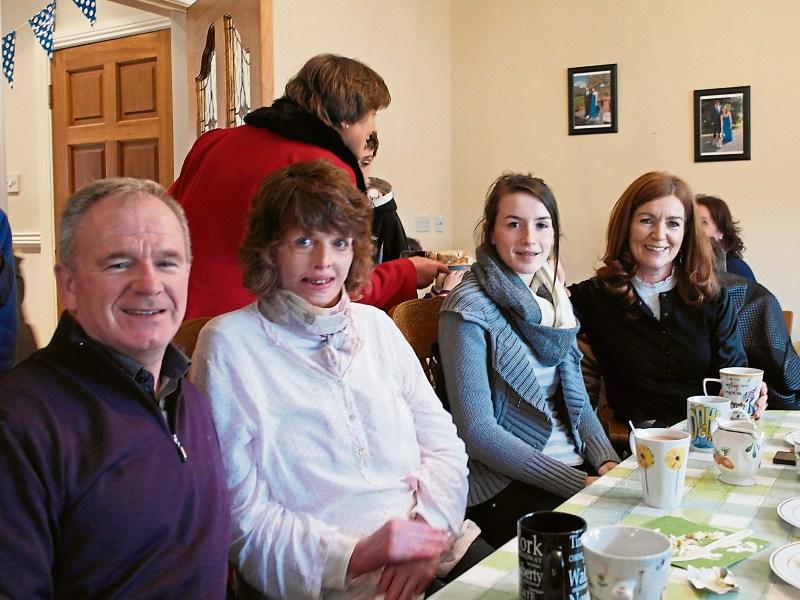 Joanne and her daughter Siobhan are pictured with Gerry Meehan and, far right, Marguerite Woulfe

AFTER a marathon 131 days of fundraising, D-day arrives this Sunday for all those involved in the Joanne McMahon Fundraising Event.

Up to 2000 people are expected to walk, run or cycle in and around Castlemahon on Sunday in what is likely to be one of the biggest ever fundraising events in West Limerick.

It is also a huge logistical undertaking and some 150 volunteers have come forward to look after parking, stewarding, registration and tea-making.

But, said Joanne, the woman who inspired it all, more are offering every day.

“I am looking forward to it,” she told the Limerick Leader. “It’s great. I think people are just spectacular the way they went off and organised things.”

Since the launch last December, over 40 “feeder” fundraising events have been organised all over West Limerick and in Australia, Canada and the US. “Between coffee mornings and nights out, it has been great,” Joanne continued.

“There has been great spirit, great camaraderie.”

But she was slow to accept any credit for herself  for inspiring people through her own determination to get on with life after receiving catastrophic burns at a barbecue just two years ago.

As a result she spent 131 days in an induced coma in St James’ Hospital and underwent several bouts of surgery with more to come. She also had to relearn how to walk and talk and continues to have daily physiotherapy.

“It is only when  you are in the situation, you  don’t have any choice but to get on with it,” said Joanne, a trained nurse and  mother of five.

“When you are there it is an awful lot easier. Otherwise, it would be the bed to the chair every day.”

But her experience of the burns unit at St James’ so impressed her that she was determined to do something in return, and at a launch last December, asked her family, neighbours, friends and strangers to help her give back.

The response to her appeal was extraordinary, sparking a wave of fund-raising efforts and culminating in this Sunday’s big event in aid of the burns unit.

Already some €60,000 has been either raised or promised, a figure which  far exceeds what was hoped for from the beginning, the chairman of the organising committee, Liam Woulfe, acknowledged.

But such has been the level of support for the event that he is confident this sum can be surpassed.

“It has been a great journey,” he said. “It has been five months of fantastic experiences. Everything was a joy. Everywhere we have gone has been just amazing. I don’t know how we are going to thank people enough.”

“Everybody was so positive,” he added. “It was a marvellous experience. Your trust in mankind would really be boosted.”

People can still register for Sunday either online or at the Red Door Gallery, Newcastle West on Saturday afternoon. This, Liam explained, is really about estimating numbers to ensure the smooth running of the event.

But whether or not they are registered, everybody must sign in at Castlemahon before the event and will receive a wristband. Signin -in for the various cycles starts at 7.30am and the 40km, 90km and 100km cycles will head out at 9am.  For those intending to run or walk, sign in begins at 10.30am, with a start time of mid-day.

A detailed traffic management plan has been put in place involving a one-way system which will be well stewarded and sign-posted, Mr Woulfe explained and hard-core parking for up to 2000 will be freely available.  But participants are asked to allow up to 45 minutes to park and sign in for their event.

Everybody will be given a number to contact in case of emergency. There is no official fee to participate in any of these events but all donations are welcome.

All participants holding sponsorship cards are asked to return them on Sunday.  Go online or to Facebook for further details or phone 0872410606.

Following the event and refreshments in the hall for participants, there will be a special Thanksgiving Mass at 3pm in Castlemahon.