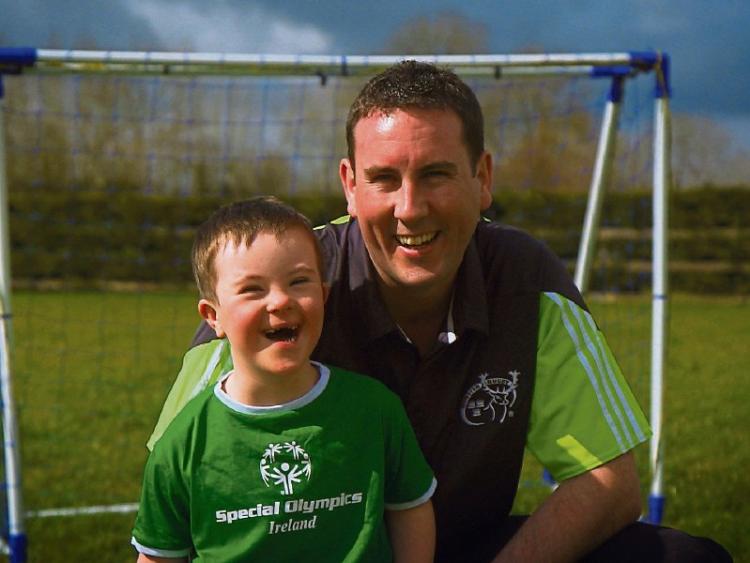 Brian O’Callaghan of Hospital got involved with Special Olympics Ireland after his son Padraig, pictured here with him, was born

A LIMERICK man who became involved with Special Olympics after the birth of his son, is calling on people to dig deep on the sports organisation’s national collection day to ensure that the athletes “reach their true potential.”

Friday, April 22 is the biggest annual fundraiser for Special Olympics Ireland; they need 3,000 volunteers to take to the streets in every community throughout Ireland to help them raise €650,000 in just 24 hours.

Limerick volunteer Brian O’Callaghan became involved with Special Olympics after the birth of his son, Padraig. He features in a video in which he highlights the importance of supporting the sports organisation.

“In 2010 my son Padraig was born. He was diagnosed with Down Syndrome. At the time myself and my wife Marie decided to embrace the condition,” explains Brian.

“At the time the Limerick Games were on and I promised myself that if they ever came back to Limerick again I would volunteer. In 2014 I found myself on the media team and somehow managed to blag my way onto the Games’ organising committee.”

Following the Limerick Games, Brian, a publican who runs Scoby’s Bar in Hospital, says he was “bitten by the bug.

“I immediately signed up for the LA Games, the World Games in Los Angeles in 2015. I’ve made lifelong friends, the Special Olympics family is very strong and the bond between all the volunteers is amazing. Disability should not mean inability and it’s up to each and every one of us to enable these athletes to reach their true potential.”

On April 22, Brian and his friends we will be out on the streets shaking buckets. He is encouraging people not only to donate but also to take part.

“I have seen first hand the different these finances can make.”

With 9,100 registered athletes participating in 15 sports in 360 clubs around Ireland, every cent counts for Special Olympics. To join the Special Olympics Ireland volunteer team visit www.specialolympics.ie/collectionday select your county and register today.