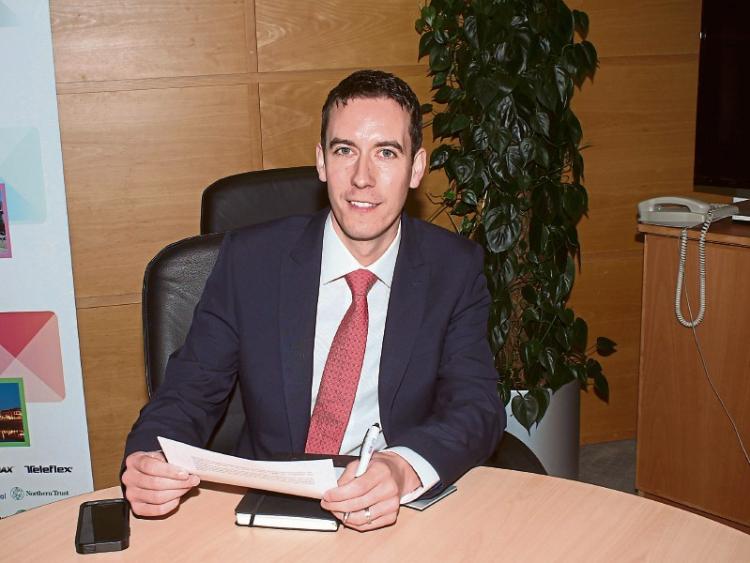 LIMERICK has a “healthy pipeline” of companies looking to locate in the county, the new regional manager of the IDA Niall O’Callaghan has said.

But he has warned that the city faces competition for this foreign direct investment (FDI) from not only elsewhere in Ireland, but also major cities like New York, Tokyo and Amsterdam.

And he says while Limerick “punches above its weight” in terms of FDI jobs, a balance must be struck between these types of roles and those from small, indigenous firms.

Mr O’Callaghan takes over the role as business development manager for the IDA in the Mid-West from Conor Agnew.

Born and raised in Adare, and now based in Croagh, Mr O’Callaghan is a graduate of the University of Limerick, where he received a degree in production management.

After this, he attended University College Cork, picking up a Master’s degree in food marketing.

Limerick has enjoyed a good few years in terms of IDA-backed jobs, with many high-profile announcements –  Regeneron for example – backed up by a number of smaller boosts. It is something Mr O’Callaghan wants to build upon.

Mr O’Callaghan is confident these targets can be met, making the point that the number of visits to the region from potential investors is high.

“We are busy, with clients coming into the region which I think is a good metric. The more clients you bring in, the more likelihood you have of success. Overall, I would be pretty confident that we can, and that we will, develop and bring more foreign direct investment into the region,” he said.

Only a few weeks into the job, Mr O’Callaghan – a recognised international athlete in his time – says the role is “everything and more than what I expected”.

“It has turned out to be even more exciting and dynamic than what I had hoped for. I am really positive about it,” he smiled. “It is a regional role. Although Limerick is the city hub in the region, it is really important to identify the fact it is a regional role, and that the regions are as important.”

Something investors comment on in Limerick, he adds, is the sense of co-operation between various bodies.

“Limerick has been identified as being a hugely important area in relation to the collaboration between stakeholders. A lot of the clients we have visiting the region have mentioned how surprised they are, and how different it is from where they have come from. How flexible, responsive and adaptive each of those areas is to helping them find a solution for what they are looking for,” he says.

In the past, it has often been stated that multi-national companies prefer to locate their headquarters in capital cities due to the larger, multilingual population base. Indeed, Mr O’Callaghan’s predecessor Mr Agnew said while this is the case, there is no reason why firms might not set up secondary bases in the Mid-West.

But Mr O’Callaghan says the “tide is turning” against this.

“Actually what we are hearing is the opposite. There has been a regional trend in recent months that we are seeing a lot of people from the regions who may have gone to college here, and gone to Dublin for work, but are now looking to come back and embed themselves in the region again. The big factor is the cost of living in Dublin versus the Mid-West, the work/life balance and standard of living, the great infrastructure, but the lack of traffic. It is a huge selling point for Limerick that cannot be under-estimated,” he says.

Indeed, Mr O’Callaghan himself is a good example of this, having returned to his home county after eight years working in the capital.

“I get to explain this to clients. I know the balance of what is different between the likes of Limerick and Dublin. On a personal perspective, what is great for me and my wife is the access to activities which can be done in Limerick now. You can go into the Milk Market, or there are gigs on in Dolan’s. Limerick is a lot more vibrant than it was ten years ago. You can go to the Ballyhouras. Limerick has developed itself, and from a personal perspective that is great. You have far more choice. It is not just the pub or the cinema,” he said.

Away from work, Niall is married to Maria and they have a 14-month-old son Conor. He admits that despite his past as an international runner, he doesn’t get to do as much of that as possible. But he has been a member of West Limerick Athletic Club for a number of years.

“Athletics is my background, it’s my passion. Now I am living in Croagh, I am a member of Croagh-Kilfinny GAA Club. I am on the committee there. I have a young son, and I want to help develop that club so when he is old enough, he is playing at a good club,” Mr O’Callaghan said.

Sounding a positive note to finish the interview, he points out that many cities equivalent to Limerick’s size cannot boast the same level of FDI.

He said: “Limerick competes well above its weight. You could go to a large city in Europe and not find that level of international business.”