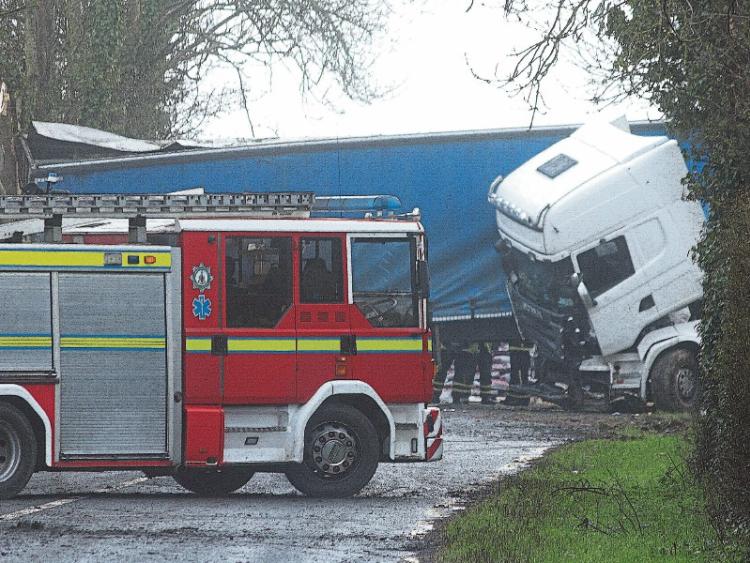 THERE were long delays on the N24 on Monday when a lorry jack-knifed on the stretch of road between Dromkeen and Pallasgreen, but an even more serious accident was narrowly avoided.

One motorist told the Leader, “I reckon ten seconds earlier and he would have met me straight on.”

Both lanes were blocked for up to four hours after the incident occurred shortly after 8am on Monday.

“I saw the whole thing unfold in front of me. The truck was coming towards me and heading for the Pallasgreen/Tipperary Town direction. I was on my way into Limerick. It happened just after the left hand turn to Nicker church.

"He just seemed to wobble, it looked like he may have got caught in the soft margin and tried to pull out but the truck jack-knifed, came straight across onto my side of the road and ended up wedged in the ditch,” said the motorist.

Thankfully there was no one behind him as he braked hard.

“I just got out, ran to the truck and as I got there another man was coming from the Dromkeen side. We both started calling out to the driver who called out that his leg was sore. We got the passenger door open and he was able to get out of the cab. From what I could see there were no major injuries apart from the leg, a cut on his head and obviously very shaken.

"I had already called the emergency services who were there very fast,” said the eyewitness.

The force of the impact resulted in the truck shedding some of its load. Traffic was at a standstill until it was diverted at Pallasgreen. The road reopened after noon.

“Thank God everyone seems to be fine after it,” said the driver, who had a lucky escape on a Monday morning drive to work.