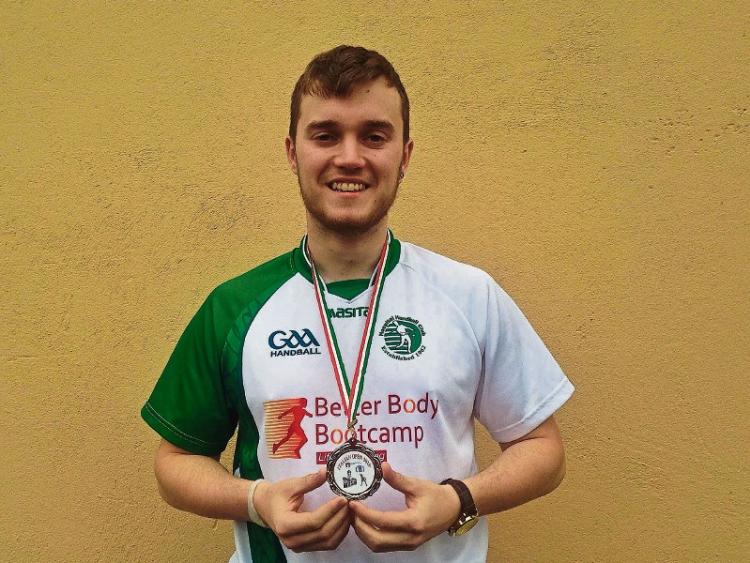 Handball player Paudi Quish, Hospital, who made the final of the Italian Open

A YOUNG Limerick handballer was even more determined to make it to the Italian Open this year after his plans were thwarted in 2015 by an air traffic control strike.

Paudi Quish, Hospital, thought it was an April Fool’s joke when he got the text to say that he couldn’t compete last year after months of training.

However, 12 months on it wasn’t all plain sailing, or flying, for the Hospital Handball Club member this time either, as he narrowly missed a French air traffic control strike and his baggage got lost.

Paudi, who is one of the top handball players in the country, said missing last year’s event in Nizza Monferrato was a big blow.

“The Italian Open is one of the pro stops on the European Tour. Last year I was hoping to establish myself on the tour but I never got the chance.

“It was a major set-back for me. Usually there are two stops before the New Year in Spain and Netherlands but I couldn’t go to them due to college commitments.

“After last year’s disappointment Italy was the big aim for me. It was the final stop on the tour. I was aiming to peak for it and thankfully I peaked well enough,” said Paudi,  who celebrated his 21st birthday the week before it.

He was the only Irish player in the tournament made it to the final, where he was narrowly beaten, after winning his three groups games, the quarter and semi-final.

“I’m very happy with it. It will be the first European final I’ve made. Prior to going to Italy my ranking was around 20th but now that I have gotten to the final it should hopefully go into the top 10 in Europe.”

He was cheered on in Italy by his girlfriend Cora Farrell, who doubled as his sports psychologist.

“My baggage got lost during the connecting flight so she kept my mind at ease and kept me on the right track. She took all the pressure off me so I had time to focus. I was lucky enough that I had packed some of my gear in a carry-on bag just in case but I got the suitcase back in the end thankfully,” said Paudi.

He definitely hasn’t the best luck with flights as on the way home he narrowly missed a strike by French air traffic control personnel as they had a stopover in Paris Charles De Gaulle airport.

Last March, another talented local handball player, Michael Whelan, was due to accompany Paudi to Italy but his hopes were dashed too. As Michael is currently studying for his Leaving Cert he couldn’t go but Paudi hopes they can return as a Limerick duo in the future.

He also wished to thank his two young training partners, Jack O’Brien and Eoghan Russell, who had him in tip-top shape.

Hospital Handball Club has seen a big increase in juvenile members in the last year with an extra 20 young players coming on board. In January, councillors in the Cappamore-Kimallock municipal district gave the club a civic reception to mark the 90th anniversary since its foundation.