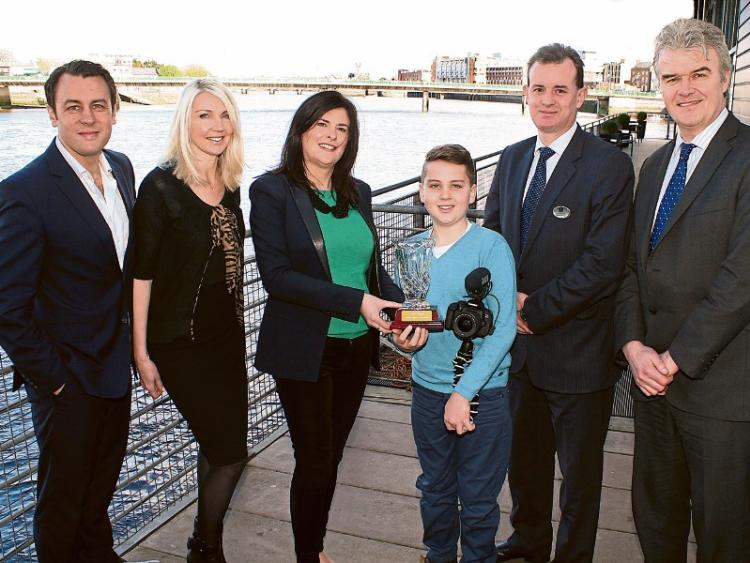 A THIRTEEN-year-old student who made a highly acclaimed video warning against the perils of cyberbullying, having been a victim himself, has been named the Limerick Person of the Month for his courageous stance in standing up to the perpetrators.

Through his powerful video, Create No Hate,  Luke Culhane from Castletroy View in the city has helped countless children, teenagers and indeed adults to cope with, and tackle, the scourge of online taunting and intimidation.

Having heard about the video, Sky News, BBC, MTV, Fox, RTE and UTV all came calling for interviews but according to Luke’s mum Claire, it was his nomination for the Limerick Person of the Month award that excited the teenager the most.

“When he was getting these big interviews with Fox and Sky he was so chilled but the biggest scream was when his dad told him about this award. I was upstairs and I could hear him downstairs. He was absolutely thrilled,” said Claire, at the presentation at the Clarion Hotel this week.

“My dad told me about the award. I thought it was really cool. I didn’t think I would get it because a lot of famous people have got it in the past,” smiled Luke, who was sat across from his mum in the hotel lobby,  with his arms wrapped around his treasured Canon camera and tripod.

Luke, a filmmaker and video blogger, explained that he has been a victim of cyberbullying himself, which “inspired me to make this video to help raise awareness for other people about how to handle it”.

“On my YouTube channel I was getting cyberbullied and I wanted to make a video about it to stand up against it,” he told the Leader.

“People were saying, ‘you’re ugly’, ‘you’re fat’ - stuff like that and ‘your videos are bad’. My mam’s friend was talking to me and he said that you should make a video about it – so I did.”

The video follows Luke on a journey through various parts of Limerick, and portrays his reaction to hurtful messages as they come through on his mobile phone and his laptop.

While the mental torment of such insults is often hidden by the victim, in the video it slowly manifests itself in Luke through physical harm such as a bloody nose, a blackened eye and an injured arm.

“No one really talks about it so I said that I would do this,” said Luke.

“I first just wanted to help someone who was being bullied – that was the goal but we weren’t expecting it actually to go really big.”

Luke produced, edited and acted in the video while his uncle – well-known Limerick photographer Diarmuid Greene – was the director/cinematographer. His father Dermot, also a noted local photographer, was production manager.

“My uncle had loads of contacts like The Rubberbandits and Joe.ie.  Joe.ie uploaded it. The Rubberbandits tweeted it and then people retweeted that and it went from there,” said Luke of how the two-and-a-half minute video initially gained traction online. To date, it has been viewed over 300,000 times on YouTube.

“We were saying just before we uploaded it that we were hoping it would get on the radio. Then, the next day, loads of people were interviewing me and I got the day off school,” continued Luke who is a first-year student of Castletroy College.

“In the school everybody was saying the video was really cool and they asked me about all the interviews as they heard me on the radio and saw me on TV.”

Even the secondary school was inundated with calls from major media outlets seeking an interview with the teen, whose long-term ambition is to become a videographer.

His parents, Claire and Dermot, have supported him all the way and are “bursting” with pride at his courage and determination to help others suffering quietly at the hands of heartless bullies.

“We have received emails and letters from kids all around the world who felt suicidal  - it was just incredible to read that,” said Dermot.

“That was the thing that really hit home. He had emails and calls from police departments from New York City who had shown it to locals,” he added.

“We have learned so much just as parents in these last few weeks since all this has happened. We thought we had monitored things and were on top of everything but not at all. And it’s not just kids who are affected, it’s adults as well and we wanted to show the bullies what they were doing and that it’s not nice to put up those kind of comments.”

Claire is particularly proud that through Luke’s efforts people of all ages  have been encouraged to talk about the scourge of online bullying instead of carrying the cross in silence.

One of the most touching pieces of feedback Luke received was an email from a 70-year-old man from England who himself was being bullied.

“He was delighted that Luke had made the video,” said Claire.

He may be on an Easter break at the moment but Luke, who has one sister Grace, and three brothers Leo, Sam and Oliver, has been busy over the past week not alone taking part in the Team Limerick Clean-up 2 event but also making a video of his exploits with his pals.

The rising star is taking his new found fame all in his stride and says he is enjoying the attention. Indeed, he has even been asked for his autograph.

“I was asked for it by my sister’s friend,” he smiled.

The Limerick Person of the Month award is sponsored by the Limerick Leader, media agency Southern, and the Clarion Hotel.