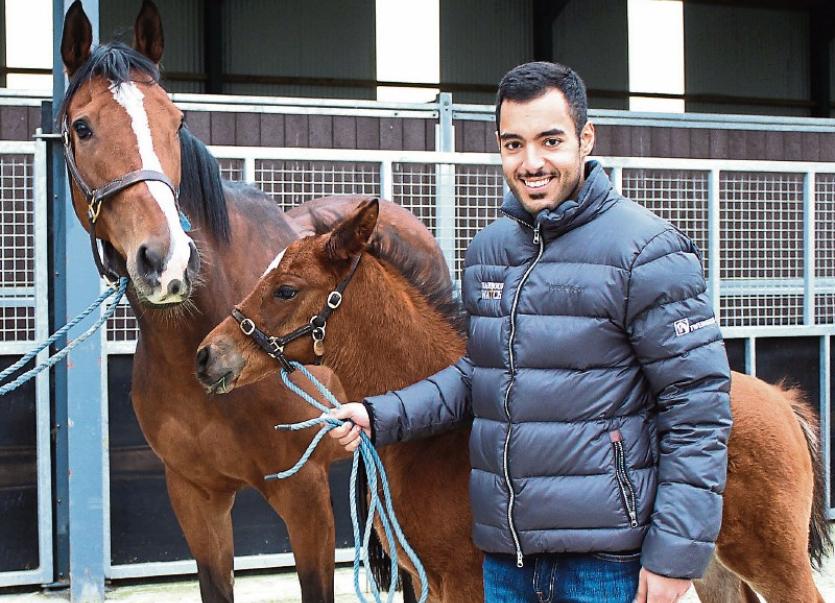 THREE years ago Qatar Racing bought 102 acres of prime County Limerick land for €1 million with the aim of nurturing equine stars of the future.

The first part of that dream was realised last week when Sheikh Fahad Al Thani arrived to see his first crop of foals born in Spring Lodge, Manister. The man in his mid-twenties is a son of the former prime minister and first cousin to the Emir of Qatar – ruled by the Al Thani family since the mid-19th century. Forbes magazine has named it the world’s richest country.

Qatar Racing – formed in 2011 by Sheikh Fahad and his brothers Sheikh Hamad and Sheikh Suhaim – has grown quickly to rival Coolmore and Godolphin.

Sheikh Fahad gave an exclusive interview to the Leader on his first visit to Limerick in 2013 and he did the same last week.

Time is of the essence as his flight was two hours late so we walk and talk on the way down to the stables.

“I see a lot of work going on which is good. We didn’t have the barns when you were last here and now the mares have foaled as well. I am looking forward to seeing a few of the foals for the first time. It is very exciting, really exciting.

“It takes a whole year of planning, waiting for them to foal and hopefully the foal is alright. It is a lot of time and labour but this is the fruits of the labour hopefully. We will just have a look now and see what we have,” says Sheikh Fahad, as he reaches the stables.

The radio is on. Matt Cooper talks on Today FM’s The Last Word and there is no doubting today is a big day. Mares and foals are quietly brought out by Peter Molony – Irish representative of Qatar Racing, owner of neighbouring Rathmore Stud and manager of Spring Lodge – and his staff.

Sheikh Fahad speaks in hushed tones with Peter and David Redvers, racing and bloodstock manager for Qatar Racing, Qatar Bloodstock and Pearl Bloodstock. The beaming smile gives it away. The member of the royal family of Qatar is pleased with his own equine royalty.

“That is a Dubawi [one of the world's premier stallions] foal, a nice foal,” points out Sheikh Fahad.

“Most of these mares, I  have chosen their coverings so it is nice to see them,” he whispers. The foals are surprisingly timid as they are surrounded by strangers and a man clicking a camera. No coltish behaviour to be seen.

“For instance that one had an Invincible Spirit, I chose that and I chose to go to Gleneagles next so she can have her next foal by him hopefully. This one is a Sea the Stars,” said Sheikh Fahad.

It is a who’s who of some of the top sires in the world.

“Are you picturing Derby and Guineas winners?” I ask.

“Exactly. That is the idea, hopefully – all the Classic races. We all hope they are correct, there are no problems and it is in God’s hands what comes but I’m very happy,” said Sheikh Fahad, who is also very content with his purchase of a Limerick farm.

“We have got nice foals so it must be good land for them to grow up in. Peter and his staff are doing a good job,” he concludes.

We take our leave and let Sheikh Fahad become more acquainted with his future stars.

After the visit Peter reflects on how far they have come in Spring Lodge in such a short space of time.

“We are delighted with how it is going, the place looks really well. We are not quite finished developing it yet, there is a bit more work to do. It is up and running and operational and we are busy so we are very happy the way it is going.”

Ten Qatar Racing mares are in-situ but they have more than 20 in total being boarded for two of the most successful farms in the UK and France as well – Newsells Park Stud and Haras des Monceaux.

Peter describes Sheikh Fahad as someone who is really keen and knowledgeable on breeding and choosing sires.

“When you choose a mating and you get a nice foal it is very satisfying. He is really committed to developing it a bit more and investing more money.

“It is really exciting,” said Peter with a smile.

One that everybody is excited about is the Dubawi foal out of Purr Along – a Group Two winner for Qatar Racing trained by Johnny Murtagh. This perfect specimen of equine alchemy has all the traits of a superstar and if it does reach its potential on the racecourse it will be one of our own.