Photographer David Hayes one of 5,000 invited guests at commemoration 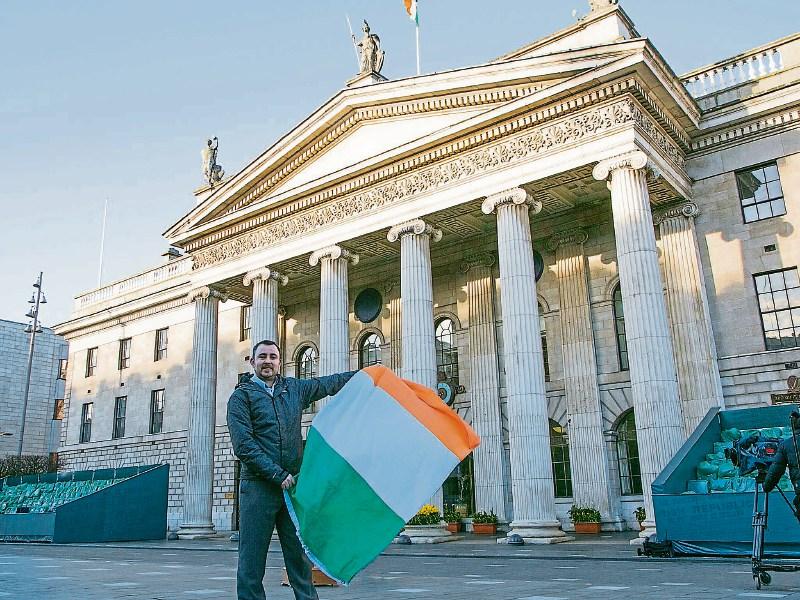 David Hayes from Kileely, pictured outside the General Post Office on O’Connell Street

A LIMERICK man who is descended from a man many describe as a significant figure in the 1916 Easter Rising was an invited guest at the Dublin commemoration.

A major fundraiser for the Easter Rising, John Devoy raised money for the rising from his base in the USA, while living in exile there. A ‘Defence of Ireland’ bond raised $600,000, money which was used to buy German rifles and a shipment of arms on the captured Aud arms ship, said Bartle D’Arcy, who is curating the Revolution 1916 exhibition at the Ambassador Theatre in Dublin.

David Hayes, a photographer by trade, was one of 5,000 guests invited to Sunday’s commemoration. He sat in a grandstand erected for descendants opposite the General Post Office, the heart of the 1916 Rising.

He said: “I was really proud to go there and represent John and be a witness to it all. I felt a great overwhelming sense of pride in my country, watching he military carry out its manouvres and seeing the president representing the Irish people. I really felt the emotion.”

David described John Devoy as a “forgotten hero” of the seminal events of a century ago, pointing out that commander in chief Padraig Pearse said he was perhaps the greatest of all Fenians, something written on his headstone in the Republican plot at Glasnevin.

“I am not looking for O’Connell Street to be renamed, but I’d like to see some recognition for him. He gave up on love, he gave up on his fiance. He never married – if anything, he was married to the Irish cause.”

Devoy is given a mention in the film which greets visitors to the Revolution 1916 exhibition, running at Dublin’s Ambassador Theatre until October, alongside the Limerick-based figures in the rising, Con Colbert, Edward Daly and Sean Heuston.

Mr D’Arcy says John Devoy was a “remarkable character”, adding: “So important was his role is he is mentioned in the Proclamation”.

He added that another less well-known anniversary taking place this year is that of the sailing of the ship Catalpha.

When John Devoy was in exile in America – where he founded Clan na Gael – as part of the ‘Cuban Five’ he organised a rescue of other exiled Fenians from Australia.

Taking up the story, Bartle D’Arcy said: “A lot of the Fenians were sent to Australia and they were kept in bad conditions. John Devoy organised a rescue from America.

“He travelled on the whaling ship, the Catalpha. It landed at Freemantle [in Western Australia] on Easter Monday 1876. They managed to take the Fenians out of the camp, bring them on the ship, outrun the British naval gun boat, and they hoisted the American flag and dared them not to shoot as it was going into international waters. It was a heroic and legendary Fenian activity.”

David has long been proud of his connection to the Rising, and is delighted that his ancestor’s role has been recognised in some quarters.

He said: “Within Ireland, if you were not involved in the political side of it, it would not be a name which clicks off the top of your head. Outside of Ireland, he was the most recognised leader.”