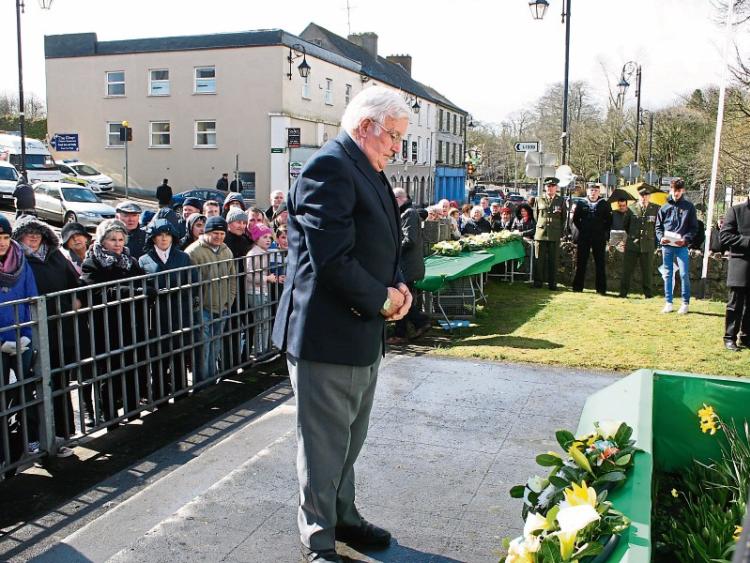 BITTER winds and driving rain seriously challenged the stamina of the crowd who gathered for the Easter Sunday commemoration ceremony in Newcastle West.

The ceremony at the Oglaigh na hEireann  monument took place to commemorate the centenary of the Easter Rising, Tim Mulcahy, vice-chairman of the organising committee, told the gathering and to remember and cherish the 17 young men whose names are inscribed on the monument.

Among those 17 was Con Colbert, executed following the rising and Capt Donal Sheehan from Monagea, who was one of the first casualties of the Rising when he died by drowning on Good Friday, 1916 at Ballykissane, Co Kerry while on a mission.

Thirteen others were men who died during  the War of Independence and two men were remembered who died on opposing sides during the Civil War. Their names are included because, as Sunday’s  memorial pamphlet pointed out,  former President Sean T O’Ceallaigh  appealed in 1953  for  past dissensions to be forgotten. The monument was erected in 1955 and officially unveiled by the President on April 10 of that year.

Recalling the 1950s, Mr Mulcahy said there was emigration, unemployment and poverty and “a level of hardship we do not experience today”. But, he added, side by side with that there was a growing realisation that for the first time in many years, our destiny as a people was in our own hands.

The Civil War had ended only a few decades before, Mr Mulcahy continued, which had left physical and emotional scars. And it was against this background, he said, that comrades who had fought together and against each other decided to come together and erect this monument.

“That is why,” he said, “it is gratifying to see people here from all political persuasions. It is a testimony to the wishes of the men who came together to erect the monument and their generosity of spirit.”

No group, Mr Mulcahy added,  has a monopoly on the legacy of our patriot dead. All 17 men were young, he said. “All of them are equal in one respect. They all gave their lives for the cause in which they believed.”

In the ceremony which followed, citations were read out for all 17 men  and wreaths were laid in their honour by relatives. The Proclamation of 1916 was read by Able Seaman Declan Reidy and an oration was given by Dr William Murphy, from Monagea who is a lecturer in history at Dublin City University.

Making a plea that we remember well, Dr Murphy said: “I can’t speak for the dead generations, but I want to acknowledge their wisdom; their acknowledgement, in their own time, that life and history are complex.

“The intentions of those who raised this monument could not then have been a call to shallow celebration, but it is a marker of achievement. It is a reminder of effort and idealism. It is a prompt to us to think about the contributions others made to shaping Ireland,” he said.

“Sixty-one years on we are further away from the events of the revolution. The past is an unusual beast in that the further we get from it the more clearly we are supposed to be able to see it. We certainly see it differently.”

“Each of us will approach this in our own way. For me, as a historian, the greatest respect we can offer to those who have gone before us is to seek to understand them, and their times, in all their complexity. We should remember them, as well as we can, for whom they were.

The organisers were unable to trace relatives for three of the men, Paddy Buckley, Paddy Naughton and Patrick O’Brien and members of the organising committee laid their wreaths.

Michael Guinane played the Last Post, the Newcastle West and District Pipe Band played the national anthem and the tricolour was raised. Monagea held a ceremony for  Donal Sheehan.