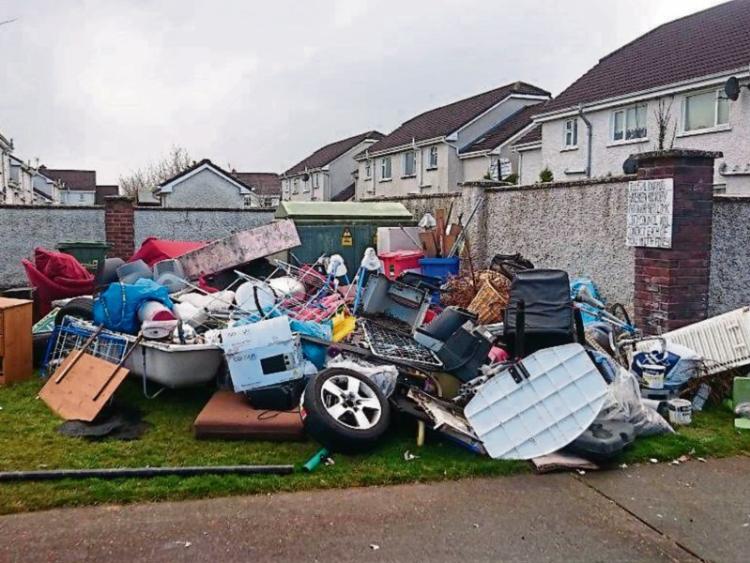 LIMERICK City and County Council is examining CCTV footage to catch the culprits responsible for dumping a lorry load of rubbish on a green area in a city housing estated.

Residents in the Cragaun estate, Fr Russell Road, are furious that a lorry load of rubbish was dumped on a green area, around the same time that 14,000 people across Lmerick were taking part in the recent Team Limerick Clean-Up 2.

“This is a constant problem, and it is not the first time that it has happened in this area,” said Mike Cussen, chairperson of the Ballykeeffe Residents Association.

Residents of the Cragaun Estate on Fr Russell Road contacted the Limerick Leader after a truck load of rubbish was dumped in a green area.

Mr Cussen is convinced that those responsible for this dumping have charged people to collect rubbish and then just dump it, at any convenient location.

“We have had plenty of this, especially on the railway line at the back of Ballykeeffe estate. Trucks have come had just tipped rubbish onto the line,” he added.

In the latest incident, a lorry load of rubbish was dumped in Cragaun Estate.

“It is just incredible that this could happen. The Council were immediately contacted and have reacted very well, and helped clean up the area,” said one resident in the area.

“It appears it came from a house, there is a wheel, bath, furniture. How could anyone just dump it there like that,” he added.

Mr Cussen said that dumping like this, is often done during the middle of the day, when most people are at work, and he asked residents to be vigilant and to take numbers of any suspicious looking vehicles.

A spokesman for the council said that residents made them aware of the dumping and that a thorough investigation is now taking place.

“We are examining CCTV footage and would ask anyone with any information to contact us, to help us track down and prosecute those responsible,” he said.