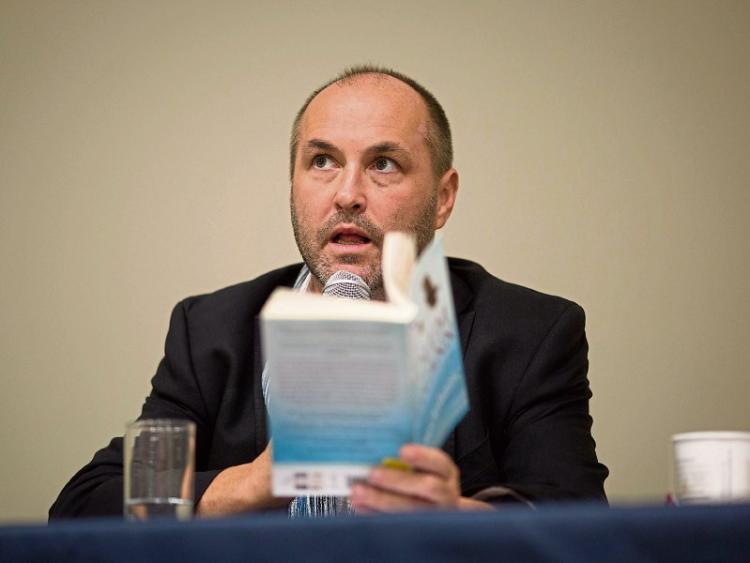 NARRATIVE 4, a global arts-education organisation backed by some of the leading lights of the international cultural world, is to set up its first base outside the US in the city centre, the Limerick Leader can exclusively reveal.

The organisation, which was co-founded by Irish author Colum McCann and Lisa Consiglio and “dozens of other artists from around the world”, promotes social change through storytelling.

It is backed by Amazon founder Jeff Bezos and Star Wars director JJ Abrams – among many others – and is to take over the former library building at 58 O’Connell Street as its first ‘global headquarters’.

Author McCann, who will speak in Newcastle West in the coming weeks as part of Eigse Michael Hartnett, said that the concept is the “desire to create a narrative for social change based on the belief that we must see the world, and ourselves, differently through the exchange of stories, primarily for young people”.

“Kids from Belfast, kids from Chicago, kids from Limerick, kids from Johannesburg. Get them together. Let them walk in one another’s shoes – almost literally. By telling the stories, not of themselves, but of others. The core philosophy is: You step into my shoes, I step into yours,” he explained to the Leader.

Asked why the organisation, founded several years ago and based out of New York, was coming to Limerick, he said: “Because I think the people of Limerick have the fire and the guts and the desire for change. I think Limerick is a model city for how to fundamentally shift perception.”

During City of Culture, Narrative 4 ran a pilot programme in a number of city schools, the first time it had participated in an “international story exchange”. The team was convinced by the enthusiasm shown for the scheme and, McCann says, that it “was not only needed in the city (but) could be a real success story”.

“It feels like the time has come for Limerick – it's vibrant and edgy and new, and I feel aligned with the city. The city has a story to tell the world.”

A pre-launch of the building, work on which is to get underway soon, will take place in April, with a global summit in June, likely attended by a number of the Narrative 4 board, Mr McCann confirmed, which will include Ishmael Beah, Terry Tempest Williams, Salman Rushdie and others.

“The Global HQ will be a hub of creative activity and a model for the growth that we will foster internationally. We will bring young people from Limerick–area schools to the city centre in order to conduct workshops in storytelling, art and creative writing using a cutting edge curriculum designed by some of the biggest literary talents in the world,” he said.

Former secretary general at the Department of Finance and current Hunt Museum chair, John Moran, has been centrally involved in bringing the organisation to Limerick. He says that it will “shine a spotlight” on the city.

“There will be a spotlight on that for a couple of years and it is Limerick’s potential to showcase what it can do, how it can row in behind this and really allow it to hit the potential it can,” he said.

“This is all part of the new narrative that has been developing around Limerick in the last couple of years, and very successfully.

“Colum and the rest of the team in New York – and indeed myself – remain convinced that we will get a team of people now around this in Limerick, who will be able to take the existing idea and make it something better.

“They have been very impressed by what they see as a sort of ‘can do’ attitude in Limerick, getting stuff done. And they are entrusting a heavy responsibility on Limerick to take that on.”

What is empathy? from Narrative 4 on Vimeo.