A marching army of 'Spuds' for Castleconnell parade 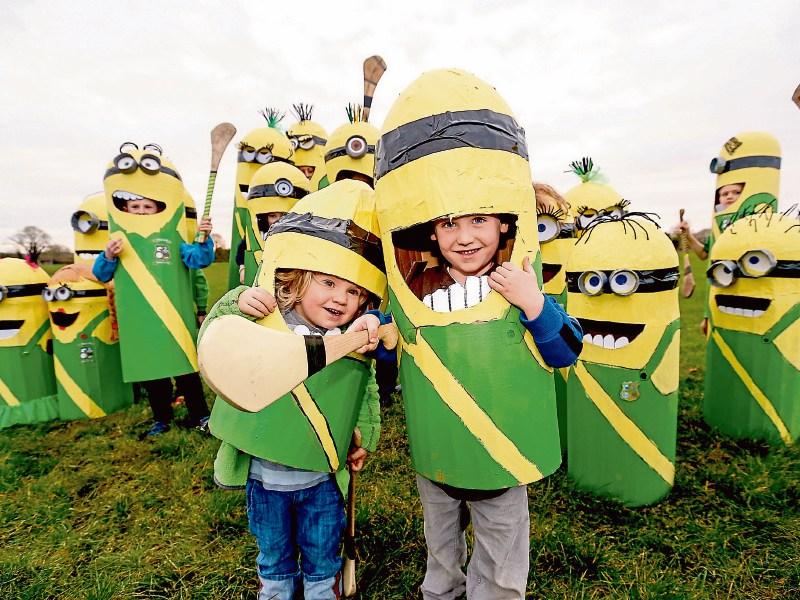 Fionn and Ewan O'Malley lead the way for the army of unique Spud Ogs marching in the Castleconnell parade Picture: Keith Wiseman

EXCITEMENT has reached boiling point in Castleconnell ahead of the village’s St Patrick’s Day parade thanks to an army of unique ‘Spud Ogs’.

There isn’t a cardboard box or tin of green paint left in the parish as over 150 children and parents have made a multitude of curious looking creatures sporting the famous Ahane GAA colours.

“A few months ago we decided to develop a mascot for our young players that they could identify with, make their own and above all have a bit of fun with. Spud Og pays homage to the old Ahane hurling war cry, ‘C’mon Ahane the spuds are boiling!’,” he laughed.

“For those who don't know where the line actually came from it's attributed to Mrs Mary Mackey, mother of Mick, John and Paddy. The lads would be out hurling up and down the village after Mass on a Sunday and Mrs Mackey would pop her head out her front door and shout exactly that in order to get the three boys in for their dinner,” said Declan.

This year is the 90th anniversary of Ahane GAA and so the Bord na nOg decided to go all out to make their participation in the Castleconnell St Patrick’s Day parade as memorable as possible.

“We got our own in house creative team going led by U21 hurler and UL student Ciaran O’Mara, son of Bord na nOg chairman Brian, and we came up with Spud Og. For the record there have been some comments that ours bear an uncanny resemblance to some recent well-known movie characters but I honestly can't see any similarity!” laughed Declan.

Over 150 cardboard cylinders kindly donated by Limerick Packaging were rolled, measured, stapled and distributed. After a couple of demonstration evenings children and parents have spent months making their own individual Spud Ogs using papier mâché, glue, pipe cleaners and many other materials.

"Making the Spud Ogs has been a lot of fun and has brought the kids and parents of Ahane GAA, ladies football and camogie clubs together so we can all showcase our pride in our various teams and native games on St Patrick's Day,” said Declan, who wished to thank the parents committee of Joan and John Moloughney, Joanne Gill, Allan Robertson, Linda and Sean Devine, Rosie and Ollie Donnelly, Sarita and Finbar McCarthy, and Lattin Cullen youth club who helped to get us started .

“Mrs Mackey and the three lads might be looking down on us and the Spud Ogs this Thursday wondering what has the GAA come to 90 years later here but if we in the Bord na nOg have our way organisers will be cancelling the St Patrick's Day parade in the future so the whole parish can march on Croke Park to watch Ahane win the All-Ireland club hurling final.”