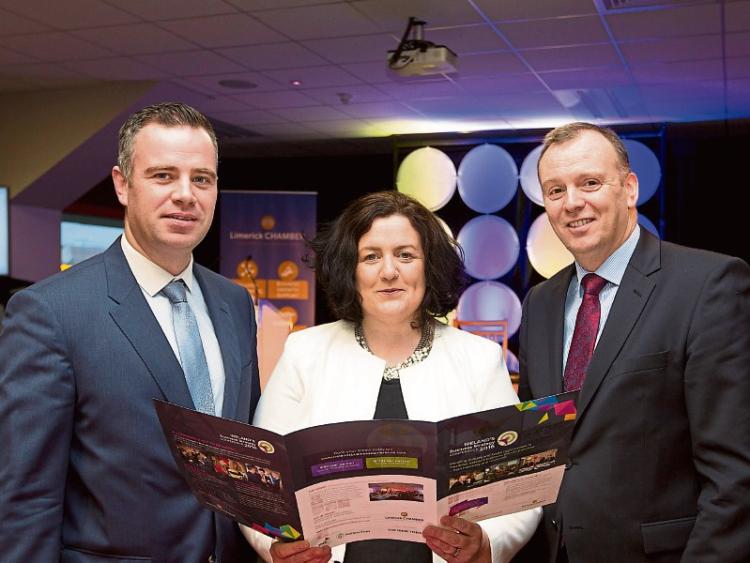 DR JAMES Ring has described his first year as Limerick Chamber chief executive as being both “interesting” and “challen-ging” – but says bigger tests are to come.

When he moved from the Limerick Civic Trust, one of his key aims was to make the business representative organisation more “member-centric”.

To this end, the Athlunkard Street man has created a number of different sectors focusing on the different types of business person there is in Limerick, and ensure members are getting the most from the organisation.

“Originally there was one pot – and all members were put into this same pot. It was not really working. What is good for a corporate is not good for a shopkeeper. Their needs are very different. The members have to be the centrepiece,” Dr Ring said.

Now there are four sectors to the membership – retail and hospitality, headed up by Dr Ring himself, corporate and lobbying, which is led by Dr Orlaith Borthwick, the 'business builder’ strand, for new start-up companies and headed by Martina McGrath, and the SME strand, for which Maura McMahon has responsibility.

It is the latter strand which is the biggest by a significant amount, Dr Ring says, with almost 70% of Chamber members in this.

Now, a new business joining the Chamber is directed to a particular person, and has a more direct input into the group in terms of te events it holds, and the services it offers: “The first thing we do with any new member, even before they sign up, is we ask: ‘What do you need from us?’ It is not up to us to say, X, Y and Z is on, we hope you enjoy it. It is more of a case of saying: ‘Why are you joining the Chamber?” Dr Ring explained.

Since the four Chamber strands were launched, he says membership has grown by around 20%.

“I think a lot of that is down to that we have got the message out – we are doing things differently, and maybe companies are taking a chance on us, giving us the benefit of the doubt, and seeing will we perform. But I think the real barometer of success will be – will they renew? That's where the real challenge lies for me.”

The Limerick Chamber needs to be “front and centre” when it comes to working with the various institutions of the city in promoting its future, Dr Ring has said previously. But ultimately to make things happen, he feels it is mainly the responsibility of the business community.

This Wednesday night, there was a special meeting in the Hunt Museum with retailers looking at what can be done to reverse the ‘donut effect’, which has seen retail thrive on the outskirts at the expense of the centre.

“If we want to see something happen in the city, we will have to do it ourselves. The council has a role, and we will not let them off the hook in delivering what they have to deliver. But other groups have roles too, including the gardai. Overall though, businesses have the biggest role. Take them out, and it is game over,” he says.

The Chamber is putting its money behind plans to introduce theme days in the centre, and encourage shoppers who may have only stayed fleetingly in the centre remain longer.

The Chamber is working with Limerick City and County Council in order to achieve its purple flag, an accreditation system which recognises excellence in the night-time economy.

Dr Ring is confident this can be delivered in short order, saying: “We are a functioning night-time economy. Where we fall down is we do not publicise it. Then you get this notion there is nothing on in Limerick. But yes there is – there are classes on in the evening, cookery workshops. The restaurants are buzzing. Yet we have not put it all together.”

But, he acknowledges it is going to take time to realise these objectives.

“I am not going to say I am going to sit here in a year’s time and we will have things fixed. It is going to take time. But there will certainly be inroads made,” he concluded.