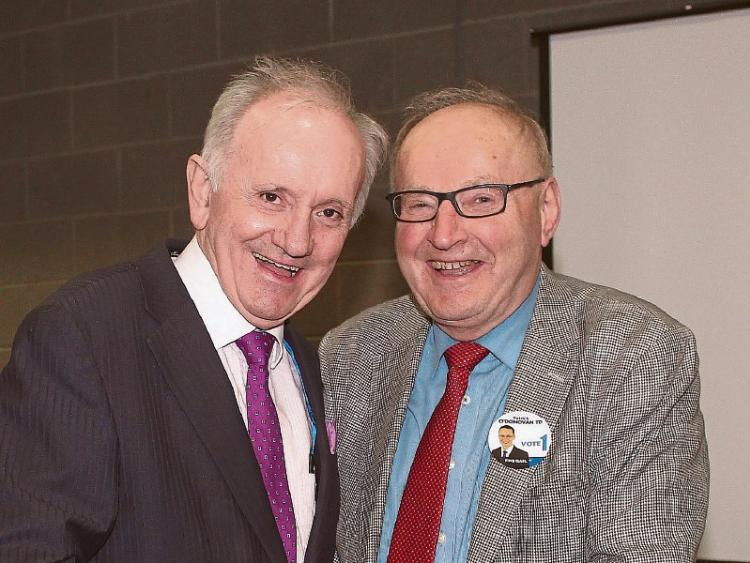 THE SMALL matter of stepping down from a life in politics won’t stop Dan Neville from continuing his crusade to raise the profile of services for mental illness and suicide prevention.

Mr Neville was at the count centre in UL to see his son, Tom, follow in his footsteps in Limerick county.

It must have been a strange experience because for the first time in decades fighting council, senate and general elections his name was not on the ballot paper. And, instead, he was a father supporting his son.

“Forget about Dan Neville. Tom is a good candidate in his own right. We saw that in the council election when he got in on the first count. He has a level of attraction in his own right without Dan Neville’s vote  – that will stand to him in the future. Because I wasn’t on the ticket we didn’t know if he was a vote getter himself but he is,” said Mr Neville.

And if the first time candidate wants any advice he has the perfect counsel in his dad.

“I can be selfish and say the work that I did – I worked very hard for 25 years on raising the profile of services for mental illness and suicide prevention – I will be able to continue through him with Dail questions and continue that campaign and information.

“I am still president of the Irish Association of Suicidology and will continue to be - that is important to me. Of course I can be there for him in anything he wants to be advised on or anything he wants me to do.

“Because when you retire, somebody like me who is engrossed in my job, in politics, in Fine Gael, in representing the people of County Limerick, we have nothing else.

“You had to be at that level of involvement. If he wasn’t selected I had nothing, now I have some role whether you call it adviser or nusiance,” said Mr Neville.

He said he was relieved rather than proud that the party, in contrast to much of the country, did so well in Limerick county.

“A lot of hard work went in by both candidates to get the vote that we have. It is obvious that the people responded to the work that both of us did - Patrick [O’Donovan] and I – over the period. The dilemma was would my vote - my personal vote because everybody has a personal vote - would my personal vote transfer to Tom and obviously it did. I would put it at 80 per cent and that is very high.” But Mr Neville Snr stresses that the election is over, three have got the public’s endorsement and it is time to get down to work.

“Hard work, very rewarding work and very frustrating sometimes, espec-ially at national level when you want to get issues of interest on agendas.

“Once elected you are a representative of all the people, those who voted for you, didn’t vote for you or didn’t vote at all. It never bothered me who ever approached me what their politics was.

“Tom will represent the people of County Limerick because he knows how I won my seat is by representing the people individually. He will do that because that is what elected me and kept me in office for that time.

“He will do that very strongly because that is the work ethic we have.”