Collins and O'Dea firmly against alliance with Fine Gael 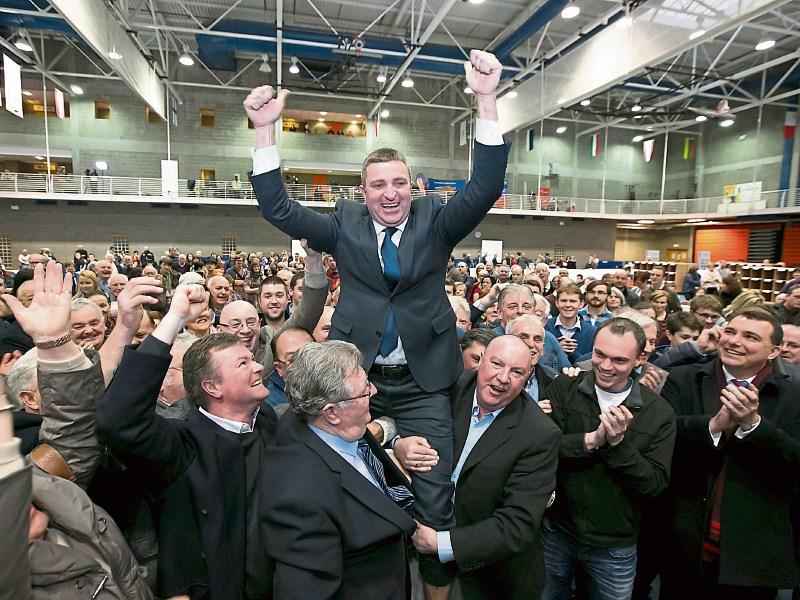 Niall Collins celebrates his victory at the election count

LIMERICK poll-topper and Fianna Fail TD Niall Collins is resolute in his opposition to any “grand alliance” between Fianna Fail and Fine Gael.

“As I said  last Saturday, and it remains the position, we are not going into coalition with Fine Gael. That’s my position on it. To do so would just seriously undermine our own credibility and the stance we have taken,” he told the Limerick Leader, just days after he received his highest ever vote of 12,276.

“In any event, Fine Gael are the largest party and the responsibility falls to them to form a government,” he said.

His city counterpart, Willie O’Dea who also topped the poll with 12,999 votes, has likewise said he wouldn’t do business with Fine Gael or Sinn Fein. He believed it would be very very difficult to get grassroots support for any such proposal in this region.

Meanwhile, the county’s newest TD, Tom Neville (FG) has said he is “in favour of exploring sensible options in the interest of the country.”

“I have no fixed position but there are a number of policy differences,” he said. However, he said he would prefer to wait and have the discussion about what might or should happen with his  Fine Gael parliamentary party colleagues who  meet for the first time this Thursday.

“I don’t know what is going to happen. I don’t think anybody knows,” re-elected TD, Patrick O’Donovan said. But he felt a lot would be revealed when the vote for Taoiseach comes up in the Dáil on March 11. A lot of the Independents come from the Fianna Fail gene pool, he said, and he believed the number of votes Micheál Martin gets will tell a lot.

“One thing that will happen is that because the numbers are so tight, you will have a much stronger Dáil and  that will force people to stand up and be counted,” he said. “At the moment we have the all-sorts brigade who don’t want to take responsibility. Together with Fianna Fail, they have the majority.”

However, he warned, people can’t be Mighty Mouse in the constituency and Minnie Mouse in the Dáil. The Independents can’t abdicate responsibility,” he said. And he castigated those who “sit on their hands” and say, like Bart Simpson, that  it is not their problem.

He also believed it was not up to individual TDs to decide for or against any grand coalition.  The membership of the party would have to have a role, he argued.

But he said: “It would be beyond what people voted for.”

In what was one of the tightest general elections in the county for many years, Limerick  returned, as before, one Fianna Fail and two  Fine Gael TD.

Fianna Fail’s Niall Collins gobbled up a whopping 30% of the first preference votes, up from 20% in 2011,  making him the county’s poll-topper for the third election in a row.

But it was Fine Gael’s Patrick O’Donovan and Tom Neville who bucked the national anti-government trend and tenaciously held on to the party’s two seats.

In doing so, they made their own little bit of history, as it was the first ever two seats in a row for the party. In addition, Limerick county was one of only two constituencies outside Dublin to return two  Fine Gael seats in a three-seter.

But their ambition to hold the two seats almost came undone with Independent Emmett O’Brien snapping at their heels. His first preference vote of 5,432, or 12%, was lower than anticipated but he grew stronger over the counts and on the last count came within 810 votes of Patrick O’Donovan for the third seat.

“I misread the election,” he told Leader reporter, Aine Fitzgerald.

Indepdent Fianna Fail candidate Richard O’Donoghue said he was happy with his vote, a big increase on his local election vote of 2014. Sinn Fein’s Seamus Browne polled 7.5% of first preference votes on his first outing as a general election candidate. He was squeezed out by Independent Emmett O’Brien and Cllr O’Donoghue.

None of the three other candidates, Alexander Storey Cosgrave, Mark Keogh or John O’Gorman, gained any traction with voters.