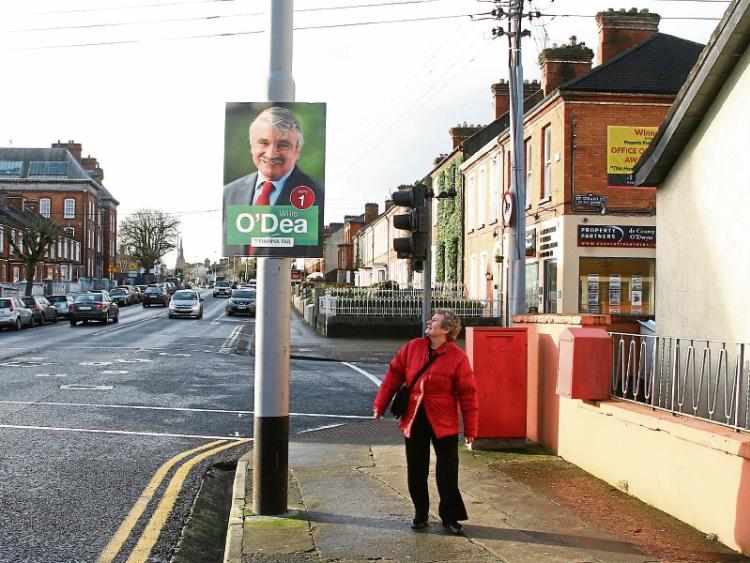 LIMERICK city and county candidates for the general election are being urged to take down public promotional material by this Friday morning, or otherwise face fines.

Under the Litter Pollution Act 1997, all posters must be removed within seven days of polling day, or by March 4. Candidates in breach of these laws could face a fine of €150.

Kieran Lehane, of Limerick City and County Council’s transport and environment section in the metropolitan district, said that the council will be keeping a close eye on all posters around the city.

He told Live 95FM on Monday morning: “I would urge all the candidates and all the parties, in their best endeavours, to remove posters, not by Friday, but ideally before that. I would ask that all the election material be removed as quickly as possible.”

As of Monday evening, there were many posters still remaining in place in the city centre.

However, a large number of posters and election paraphernalia had been removed since Saturday afternoon.

Additionally, under the Road Traffic Act 1961, it is an offence to erect a sign that is capable making a traffic sign less visible to road users or obstructs the view of public road users so as to render the road dangerous to them.

Under the Roads Act 1993, the local authority has power to take immediate action to reduce or remove any structure that presents an immediate and serious hazard to persons using the road.

Over the past month, since the announcement of the campaign, locals have issued a number of complaints to the council over election posters.

Cllr Cian Prendiville, who was eliminated on the fourth count, said there was “no malice” when posters are left up, as it mainly down to human error.

“It is law, and we have to get them down. What goes up must come down, as they say. Every candidate will want to get them down because they might need them sometime soon!”