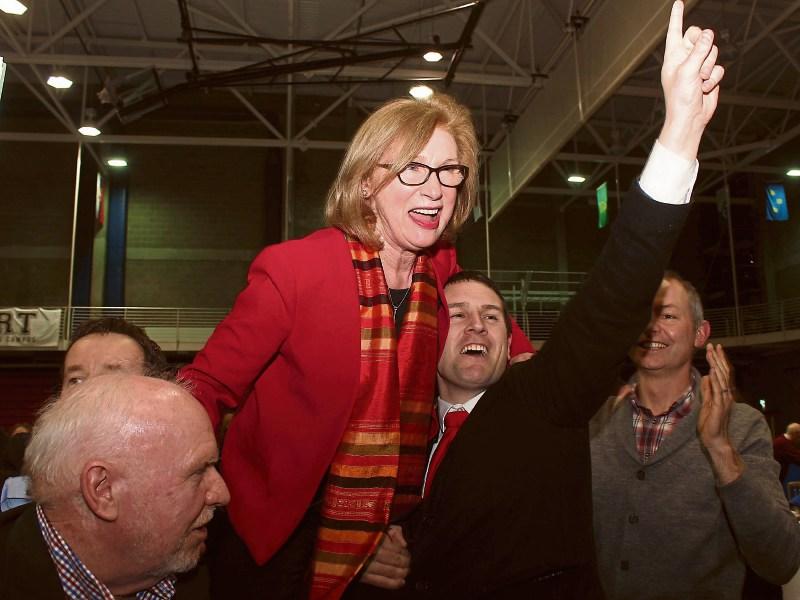 EDUCATION Minister Jan O'Sullivan says she is "absolutely relieved and delighted" after holding onto her seat in Limerick City in the most dramatic of fashion.

Ms O'Sullivan, a TD in Limerick since 1998, won 8,187 votes in total, and was elected on the final count. It followed an incredible day of drama, in which she was at one stage more than 800 votes behind Fine Gael TD Kieran O'Donnell.

Many in the Labour party had conceded the long-serving deputy was unlikely to hold onto her seat - including Ms O'Sullivan herself.

But at the fourth count, a huge transfer of 835 votes from eliminated candidate Sarah-Jane Hennelly of the Social Democrats put her just 176 votes behind Mr O'Donnell.

And at the fifth count in the small hours of this Sunday, she passed the Fine Gael TD for the first time in the day, a lead she would hold onto.

Speaking to reporters in the aftermath of her election, she said: "We have had so many ups and downs today. I feel relieved, delighted and pleased that the long tradition of the Labour seat is now maintained. We continue to fight."

After returning officer Gerry McCague confirmed her election, her supporters hoisted her in the air, chanting her name, and holding up posters stating that her political mentor Jim Kemmy would be "proud" of her.

Asked about the campaign, she said in retrospect, Labour should have stood up to the Anti-Austerity Alliance more.

She said: "We set about ensuring we stood up to the threat of Sinn Fein. Maybe in retrospect, we could have stood up to the Anti-Austerity Alliance a bit more. They plastered the city with anti-Labour posters. It was very negative campaigning, and it is something we should in  future ensure we respond to that negative postering which was truly designed to smear our party and attack a fellow party of the left."

Despite the anti-government vote this time, Ms O'Sullivan still feels the by-election where she won election to Dail Eireann for the first time in 1998 was her toughest campaign.

She said: "I think the most pressure was the by-election. Jim Kemmy had died. We were not given much of a chance at the start of the election, but we won through. Many of that team from that election have stayed with me, and many new people too,. that was the highlight, but this was extremely important too. We have kept that traditional left Labour seat in Limerick against the odds, and I am very proud we have been able to do that."

And she paid tribute to Mr O'Donnell, saying: "He has been an excellent TD. He has always served the people of Limerick really well. It is really tough for him. I know exactly how he feels. I was feeling the same way. I have no doubt he will be a TD for Limerick again."

She added now she is planning "a bit of a celebration despite the late hour".