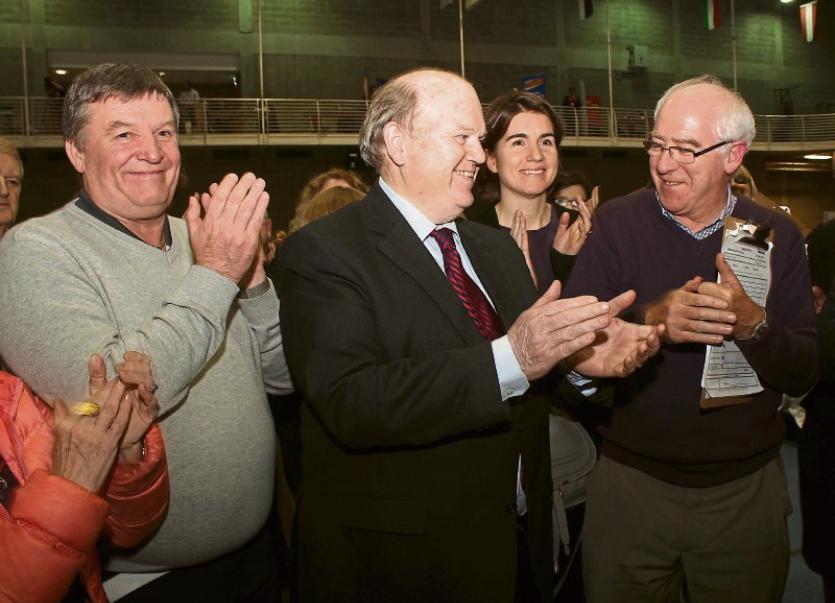 SUPPORTERS of Michael Noonan had to endure a long day at the count before he was eventually elected after 1am on Sunday morning, alongside Jan O’Sullivan, as the last two remaining candidates in Limerick City.

The Minister for Finance would not be drawn on whether Fine Gael should reconsider its decision not to go into government with Fianna Fail.

When asked if Fine Gael should reconsider their decision of not going into power with Fianna Fail he said: “I don’t know what the result of the election is going to be – it may be late tomorrow night or Monday before final seats are filled. It’s clear that it is quite uncertain.”

When asked by Limerick Leader news editor Eugene Phelan if this would be his last election, as he stated in the past, Minister Noonan said: “When did I say that? I think you dreamt that.”

The Gouldavoher based candidate polled 7,294, almost 6,000 less than he got in the last election when he topped the poll.

He did not arrive to the count centre until 11.25am and immediately sat down with his team of supporters including Tim O’Connor, Pat O’Brien, Alan Kavanagh, Aileen Browne, Elenora Hogan, Dan O’Connell, councillors Daniel Butler and Maria Byrne and others to discuss events of the day, saying he would talk to the media after the official count was announced.

Also joining him was his daughter Orla, who flew back from her job in a bank in Paris, to support her dad and stay closely by his side.

Prior to the election he had told those close to him that he felt Willie O’Dea would top the poll, but would have been surprised to have dropped so many votes, though he remained extremely strong in the Dooradoyle area where he is based.

Many of those closed to Michael Noonan were not surprised that he dropped his vote considerably from the 13,291 votes he received in the 2011 general election.

Life long friend Tim O’Connor, one of the driving forces behind the resurgence of Na Piarsaigh GAA club, went canvassing with the Michael Noonan team every day.

“We said all the time with two Fine Gael candidates we were going to split the vote. It worked out fairly well, but the vote did drop,” he said.

He did not think that Michael Noonan’s health problems or his age were a factor in the vote loss.

“It is just that the Fianna Fail vote lent to us in the last election went home,” he said.

“I was with him every day. He got a great reception. Only that we ran such a strong campaign, the way the results had gone, it could have been more serious for us,” he added.

He said that as a high profile candidate and Minister for Finance, Mr Noonan had to travel a lot to Dublin for media briefings.

“That did effect our canvass, but having said that it was not a factor on the doorstep, people were not looking for him on the doorsteps, they understood the situation.”

Former director of elections for Fine Gael, retired accountant, Aidan Hurley from Ballykeefe, has also been campaigning with Michael Noonan for over 20 years, and also felt Willie O’Dea had the upperhand, as a lone candidate.

”No great surprise there. Willie O’Dea was always going to top the poll as he was running on his own. I was out canvassing with Michael and he got a great reception on the doorsteps. Look at the vote he got at St Paul’s, Dooradoyle and St Nessans  Mungret, well over a hundred votes in all the boxes,” he said.

“He had to go to Dublin a lot for media, but I think the thing that affected him most in the build up to the election was the death of his brother – Fr Jim Noonan. They had become very close since he returned to Ireland and his death really hit him,” added Mr Hurley.