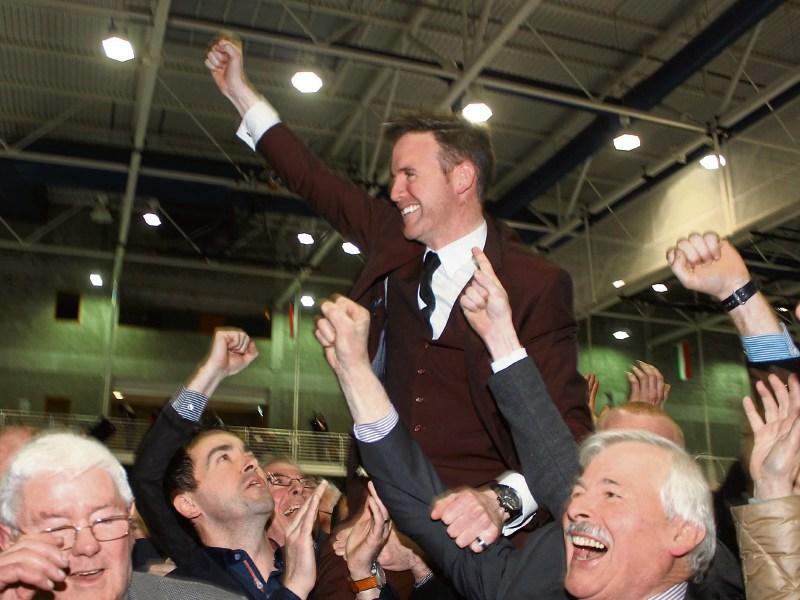 “DON’T sign up for it if you are not able for the pressure,” said Tom Neville, seconds after he was hoisted in the air after being elected a TD for Limerick county.

It was a joint celebration for Fine Gael as Deputy Patrick O’Donovan was also elected after the sixth count.

Mr Neville had been written off by many political commentators as he sought to follow his father - Dan Neville - into Dail Eireann.

“After growing up with it in and after working with Dan in the office for a number of years I knew what the step up from council to the Dail was going to be like. I knew i was ready for it, that is why I went for it,” said Mr Neville.

He said he was “very ,very humbled” that the people of County Limerick had put their faith in him.

“I just want to repay them as best I can and serve them like my father has done for quite a long time. I just want to continue the representation that he did and I was so humbled by the support I have been given by County Limerick. I love my country and want to help run it as best as we possibly can,” said Mr Neville.

“As a party we have bucked the national trend and I want to congratulate Patrick O’Donovan,” he added.

Mr Neville wouldn’t be drawn on the possibility of entering coalition with Fianna Fail.

“We have to see what way the result comes in. I haven’t been totally abreast of the national situation. I will be guided by my party, in the interest of the country and the national interest. We don’t know the full results, it would  be premature to speculate.

“We will have to wait and see the mandate given in relation to going and forming a Government. Obviously all avenues i would expect will be explored.

“It is going to be a very important five years. We want to keep this recovery going . We need to keep stability in the country. That is a conversation for tomorrow or the day after when we see exactly what the results are and the mandate the Irish people have given,” said Mr Neville, as well-wishers crowded around him.