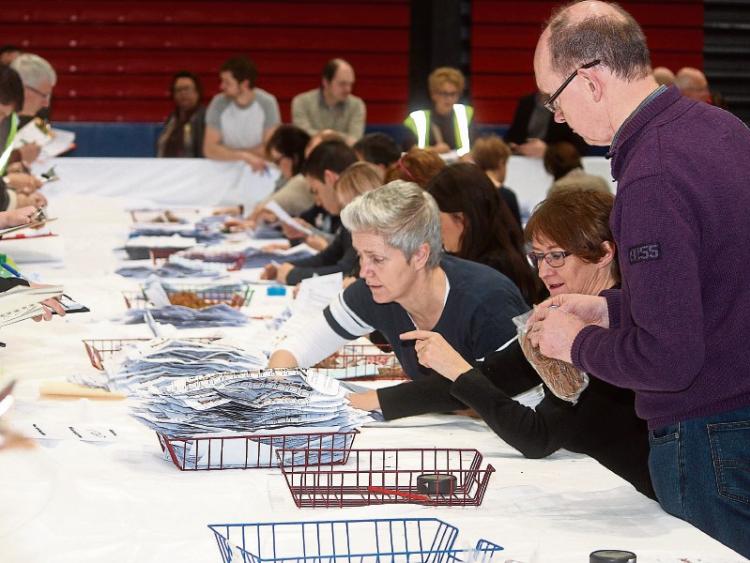 First counts in the Limerick constituencies are done

IN a reversal of fortunes for Fianna Fail in the 2011 general election, the party has rebounded to top the poll in both Limerick constituencies.

The first count in Limerick City is now over, with Willie O'Dea topping the poll with 12,999 first preference votes.

He comfortably surpassed the quota, which was announced by returning officer for Limerick City Gerry McCague to be 9,353.

Now, the former Defence Minister's huge surplus of 3,646 will be distributed, with an earlier prediction from Cllr Maria Byrne suggesting his transfers "are going everywhere".

He is followed by Sinn Fein councillor Maurice Quinlivan, who has 5,894 votes, and Education Minister Jan O'Sullivan, with 5,227.

Mr O'Dea's surplus is now being distributed, and the second count is expected within one hour.

There have been widespread predictions from politicians through the day of a "dogfight" for the final seat between Mr O'Donnell and Ms O'Sullivan.

Cllr Byrne believes the race for the final seat will go to the "eighth or ninth count".

"It is going to be a very long night here. The preferences are going everywhere. Cian Prendiville is sitting on 4,500 votes, so it will be interesting to see where his preferences are going. I think some of them will go to Cllr Maurice Quinlivan, but a lot of them are sitting on a similar type of vote, it's very close," she said.

Meanwhile, Niall Collins has topped the poll in the Limerick constituency with 12,276 first preference votes.

He was followed by Fine Gael’s Patrick O’Donovan with 8,479 votes and Tom Neville, who polled 8,013.

Independent councillor Emmett O’Brien took 5,432 votes and, despite being a strong favourite in the run-up to the election, now appears unlikely to get enough in the transfers to stop Fine Gael getting the remaining two seats in the constituency.