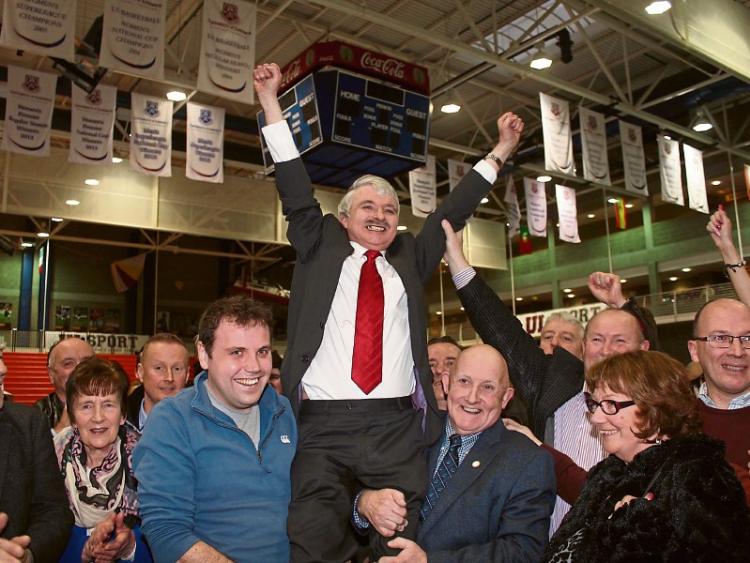 Willie O'Dea is held high among his supporters at the UL Arena Picture: Michael Cowhey

WILLIE O'Dea - Fianna Fail's comeback kid - has topped the poll in Limerick and has won the first seat in the hotly contested Limerick City constituency, after reclaiming his majority from Finance Minister Michael Noonan in the last election.

Scenes in the UL Arena this Saturday afternoon, where Willie's arrival was greeted with cheers of triumph, were a stark departure from those five years ago, when he left the Arena before the sixth count, when he was elected.

Amassing some 12,999 first preference votes, the scene now turns to who will receive his transfers, as his vote more than exceeded the quota.

The 63 year-old from Kilteely, who lives in Farranshone, described his mandate from the people as "humbling and a great honour".

"It's very different from 2011, when the tide was out for Fianna Fail. People told me then that they reluctantly didn't vote for me. Even in 2011, my loyal personal vote that I worked very hard for, allowed me to live to fight another day. Today's the other day and I want to thank my canvassers and my election team and all the people who voted for me. My canvassing team were outstanding, they must have been the best in the country. Literally we had to turn people away there was so many people volunteering."

"Nationally, it's still all to play out. A lot of the counts won't be completed until midnight, or tomorrow or Monday. We'll have a look at the landscape when the whole thing is finished, to try to form a stable government and if we can't do that, we'll have to consult the people again. Let's just wait and see what the final outcome is. We have a heavy responsibility on all the new deputies to try to form a Government," he said.

Deputy O'Dea said the "last thing we want to do" is to hold another election but "if that becomes necessary so be it".

Both he and party colleague Niall Collins have "firmly ruled out" forming a coalition with Fine Gael or Sinn Fein.

"That wouldn't be good for the country, it's not just a question of party advantage."

Regarding the decision not to run a second Fianna Fail candidate in either Limerick constituency he said that decision was made "at a time when they believed Michael Noonan would sweep the decks and Jan O'Sullivan would still be Minister. I don't have any particular preferences [for which candidates he'd like to see take the third and fourth seats]. Whoever people give their number two to, c'est la vie, so be it. They won't be Fianna Fail people anyway, so it's a matter of indifference to me."

Asked about Minister O'Sullivan he said, "I've a very good relationship with Jan, she's a very decent person, very honourable, and she's been a good Minister for Education, in my opinion, although I disagree fundamentally with the Government on certain aspects of education policy. It would be very sad if she lost her seat, and for the electorate, but it's still a melting pot."

Deputy O'Dea arrived at the count after leaving his election headquarters in the Horse & Hound on Mulgrave Street, he'll be celebrating in South's pub tonight.

Mary Bourke, the eldest of O'Dea's sisters, and his sister Catherine O'Carroll, said they are both delighted for him.

"He's a great worker, he has a reasonable amount of intelligence and he respects the people that he represents and I think that's why he gets the votes that he gets. The wind was a bit with us this time. There were a lot of people hurt and angry and get expected more. I think the next government will have to temper their taxes with humanity, because I don't think taxation is the way out of recession. We need industries and employment, and dear god our health service is a debacle."

She said they'll have a couple of parties tonight.

One of Willie's sisters lives in Australia and had been "praying for him", said Mary. If she was in the country, Mary said, she'd be running alongside Willie herself. Like the Healy-Raes? "Oh, they'd be worse," she said with a laugh.

Both women live in Hospital, county Limerick, and lamented that they could they vote him in that constituency, and instead voted for Niall Collins.

Fianna Dail councillor Kieran O'Hanlon, who has been out canvassing with the former Minister for Defence in recent weeks, said it's a well deserved victory.

"It's a testament to all his hard work, and of course he's been canvassing for the past five years, not just the last few weeks. He's delighted that the people of Limerick have recognised his great work. The reception he got on the doors was just phenomenal. Of course, we'll be celebrating tonight - all over Limerick - the only dampener is the sad absence of Joe Crowlley," he told the Limerick Leader.

He said the 13,000 plus votes that O'Dea received was fantastic considering the emergence of new parties and independents.

"Relatively speaking it's nearly as high as Willie could have expected," he added.

Deputy O'Dea received 6,956 first preference votes in the 2011 general election, some 16% of the vote, and took the third seat on that occasion.

In 2007 he enjoyed his greatest reign, amassing a staggering 19,082 first preferences, with a 38.65% share of all votes, and took the first seat after making more than twice the quota.