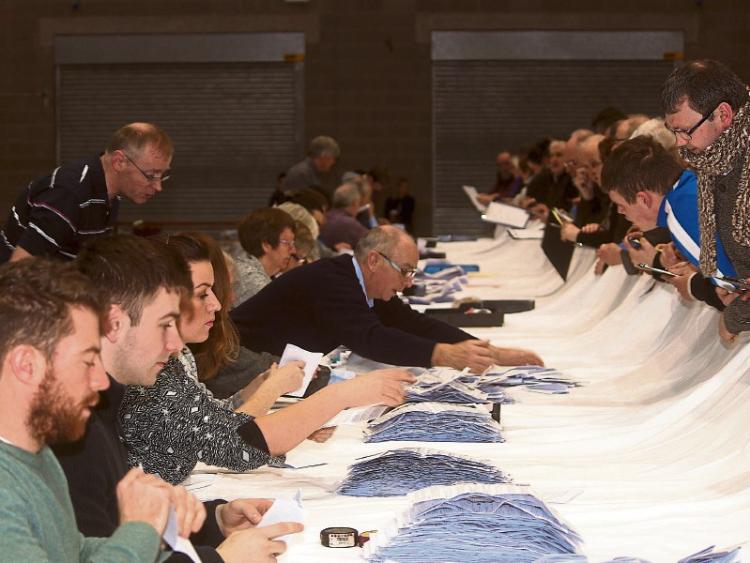 Sorting in the UL Arena for the general election

FIANNA Fail TD Willie O'Dea is on course to top the poll in Limerick City following the final tallying of votes in UL Arena.

All 133 of the boxes in Limerick City have been opened, with the former Defence Minister staging a remarkable recovery to lead the way with 13,100.

He is followed by running mate, Fine Gael TD Kieran O'Donnell, who has 6,194 first preference votes.

Sinn Fein councillor Maurice Quinlivan is just behind with 5,898 votes, according to the tallies.

Meanwhile in the Limerick constituency, it appears Independent councillor Emmett O'Brien, tipped by many for a seat, may lose out. Former Fine Gael TD Michael Finucane has predicted his party will take two of the three seats here.

Back in the city, Labour has already predicted Cllr Quinlivan will take a seat, while Fine Gael councillors Daniel Butler and Michael Sheahan have admitted that Willie

O'Dea will return to the top of the poll, having missed out on this in 2011.

While Mr Noonan and Mr O'Dea are certain to be elected, with Cllr Quinlivan also expected to win a seat, the last seat is set to be a battle between Deputy Kieran O'Donnell, Education Minister Jan O'Sullivan and Cllr Cian Prendiville.

All eyes will be on the destination of what is likely to be a large surplus from Mr O'Dea, with Labour sources indicating he is transferring to their candidate.

Meanwhile, in the final tally for the three seat county Limerick constituency, Niall Collins (Fianna Fail) is on course to be elected.

With all of the boxes opened, he has 12,085 first preference votes recorded.

After leading in the early tallies, Fine Gael's Tom Neville is at 7,910, with his running mate Patrick O'Donovan now ahead with 8,413 first preferences.

Independent Emmett O'Brien has 5,421 first preferences according to the tallies.

And former Fianna Fail councillor Richard O'Donoghue has 2,823 first preferences, according to the tallies.

Mr Finucane, a leading member of Fine Gael and a veteran election watcher, is predicting that the much fancied Independent Emmett O'Brien will lose out. Asked if he thought FG would take two seats, he replied, simply: "Yes, I think we will."

Please remember these aree unofficial tallies, as of 12.40pm this Saturday.