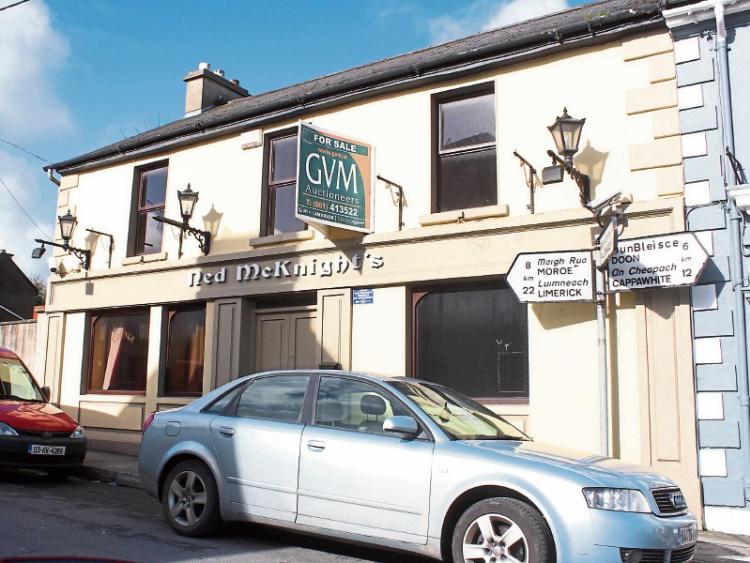 A pencil drawing of Ned McKnight’s in Cappamore is to hang in Brown Thomas’ Grafton Store after they bought the pub licence Picture: Michael Cowhey

BORED men will be toasting a pub in Cappamore as they can now enjoy a pint of plain in Brown Thomas on Grafton Street – while their better halves shop for style.

The pub, owned by Jim Madden, was closed over two years ago but it will live on in Dublin. Mr Madden, from Kilsheelan, had to attend the first court hearing.

“It was quite an experience being in the Four Courts. Judge Groarke did make a comment that they should put a picture of McKnight’s in the new bar. So what I am hoping to do over the next few weeks is talk to somebody in the Limerick School of Art and Design to do a pencil drawing of it. I think it would look very well rather than a photograph,” said Mr Madden, who hopes to be invited to the grand opening.

The licence went from east Limerick to south Dublin after Mr Madden was contacted by an agent about his clean pub licence.

The court heard the store had been operating a wine licence in its restaurant for the last 40 years and wished to broaden the offering for its customers, particularly those who had to wait around while their partners and spouses finished shopping.

Mr Madden, who described Brown Thomas employees as “lovely people to deal with”, said Lorraine Bedford, health and safety compliance manager, had a very good argument for the judge.

“She said, ‘Your honour, if you were in with your wife and she was shopping, perhaps you would prefer to have a drink rather than a glass of wine or a cup of tea’. Judge Groarke laughed and he said, ‘Do they really tell us the truth about how much they spend?’” recalled Mr Madden.

The judge then asked if he could see a menu.

“They have a restaurant and the bar will be in the restaurant. Lorraine showed him the menu and he looked down through it. He said, ‘My God, €4.50 for a portion of spuds’ and quick as flash she said, ‘Your honour, I think we will have to look at that and maybe increase it!’” said Mr Madden, with a smile.

You wouldn’t get away with charging almost €5 for chips in Cappamore but unfortunately it was the reduction in drinkers that put paid to Ned McKnight’s. It got its name after Mr Madden’s son Eoin did some research and found he was a famous local character. Formerly a hotel it has been on Cappamore’s main thoroughfare for the best part of 100 years. The Maddens bought it about 15 years ago from Tom O’Toole.

“We had a great 10 to 12 years with live music at the weekend but then the bottom just fell out of it. We closed it two to three years ago. The problem with Cappamore was that after Dell closed and the building industry slumped there was mass emigatrion.

“I was in O’Dwyer’s one evening in Cappamore and a person had just come back from Australia. They said the whole intermediate hurling team from Cappamore was already in Australia,” said Mr Madden, who also pointed to the increase in people drinking at home.

“There is no doubt that villages across Ireland – and Cappamore is no exception – have been decimated. I think there are a lot of publicans in the country only making a living wage,” he added. But while Mr Madden was forced to close the pub he has fond memories of the village and stays in contact with many from the area. “We had some great night nights and there was never any problems. That was one of the things that Brown Thomas would have looked for – a clean licence. We have all the tax clearance certificates that you need and there was no problems with the guards. We ran the pub right,” said Mr Madden.

He, like many, is looking forward to seeing Brown Thomas’ new pub on the third floor.

“From the point of view of Cappamore people going to Dublin, they will all want to see it. Won’t you get great brownie points from bringing her to Brown Thomas while you go to the bar!”